Taking even small payloads into orbit is expensive, thanks in large part to the use of expendable rockets to break the bonds of gravity. Companies like SpaceX are working on reusable rocket technology that could carry cargo and people into space, but Boeinghas just filed a patent for an alternative method. Being’s new reusable launch design could get satellites into low-Earth orbit by by way of four different vehicles working together. Believe it or not, this could be a much cheaper way to reach space.

Most of the launch vehicles in use today are based on the ballistic rocket designs of the 1950s. Basically, you point it toward the sky, light the fuse, and hope the explosion only comes out of one end. The Boeing reusable system wouldn’t rely on a vertical takeoff rocket at all. Instead, a small rocket would be contained within a hypersonic aircraft, which is docked to a supersonic aircraft. Then the entire contraption is mounted on a large carrier aircraft. It’s like a flying matryoshka doll. It is this carrier aircraft that gets the payload off the ground, and it takes off like a conventional plane.

If you’ve ever seen an image of the Space Shuttle being hauled back home after landing, you can probably visualize the launch of Boeing’s launch vehicle. The high-speed aircrafts are attached to the fuselage of the carrier, which takes them up to a pre-determined altitude known as L1. At that point, the carrier disengages and lands under its own power. The supersonic component powers up and takes the rest of the vehicle higher into the atmosphere. At the next altitude cutoff (known as L2) the supersonic part detaches and heads back to Earth. That leaves the faster hypersonic section to continue on alone, but it never leaves the atmosphere.

Boeing’s hypersonic aircraft essentially acts like a traditional launchpad that happens to be flying at the edge of space (an altitude called L3). It opens a compartment and launches a small ballistic rocket, which carries the payload into orbit. The hypersonic vehicle then returns to Earth to rejoin its companions to be used again. Even the rocket is eventually recovered after falling back into the atmosphere and deploying a parachute. 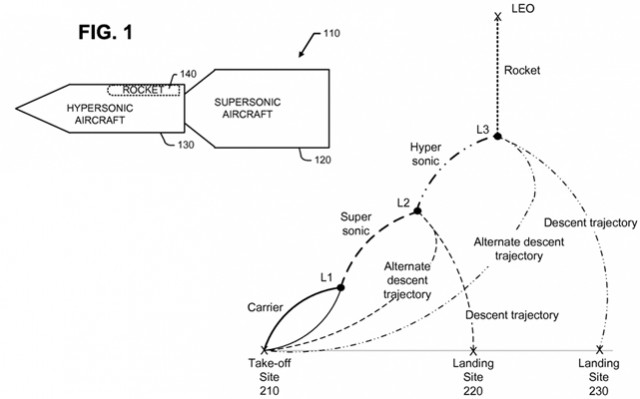 A satellite launch right now can cost anywhere from $50 to 400 million depending on the mass and desired orbit. Boeing estimates that its reusable launch system could reduce the cost by two-thirds. As an added bonus, it could be launched from any airport with a sufficiently long runway for the carrier to take off.

Boeing’s newly designed launch system looks like a scaled-up version of a DARPA concept called ALASA, which would use supersonic fighters as a way to get small satellites into orbit. DARPA awarded Boeing the contract to build and test ALASA in the first half of 2016. It seems likely this is the first step toward making the full launch system described in the patent a reality, but that’s probably a lot further off than 2016 — the four components of Boeing’s system don’t even exist yet. Give it a few years and maybe Boeing will be slugging it out with SpaceX to see who can get a satellite into orbit cheaper. That can only be good for the rest of us.