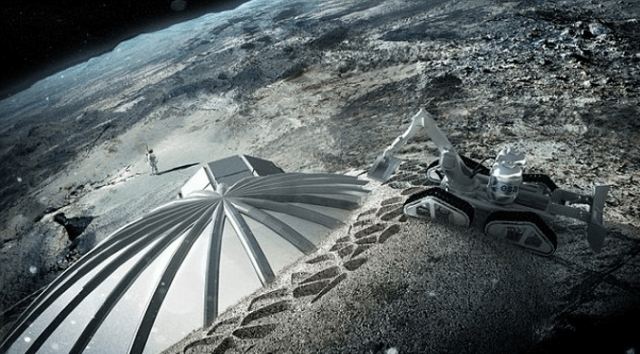 China’s Chang’e lunar probe dynasty is already having a great year. The Chang’e 3 lunar lander surpassed all expectations last week to emerge from its 14th hibernation while the Chang’e 5-T1 just completed its transfer from the Earth-Moon Lagrange Point 2 into a stable orbit around the Moon. Chang’e 3’s main mission was only to take spectrographic and ground penetrating radar measurements, but the Chang’e 5 missions will bring back the first samples containing the actual prize — fusion-ready helium-3.

One of the main reasons helium-3 is sought as a fusion fuel is because there are no neutrons generated as a reaction product. The protons that do get generated have charge, and can therefore be safely contained using electromagnetic fields. Early dreamers imagined that Saturn or Jupiter would be the ideal places to try and get their hands on some helium-3, but it now appears that the Chinese have set their sights on the Moon. 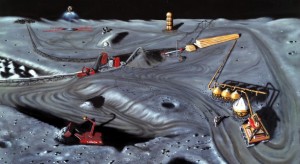 Although the Sun dispenses ample amounts of helium-3 wherever it blows, the Earth is largely shielded from this windfall by its own magnetic field. The little we do have is mostly generated by various terrestrial processes like cosmic ray bombardment and even relic sources from leftover nuclear warheads. The Moon, on the other hand, is a far more concentrated depot with up to five million tons conveniently embedded in its top surface layer.

If you are thinking that panning the entire surface of the Moon might not be a sound business model, consider that helium-3 would probably not be the only payoff expected. Just as extraction of rare earth metals on our own planet is often piggybacked on a larger iron ore harvest, the Moon would offer a lot in the way of other primary raw materials like, for example, titanium.

While the West might justify its own inaction on the helium-3 front in terms of old space treaties or lunar conservation, excuses like this are probably laughable to a country like China who now actually is going and getting their own lunar helium-3. The real hurdles they face are not the bureaucratic red tape or even the logistics of a mass space and mining effort, but rather the physics of helium-3 fusion itself. In other words, is helium-3 necessarily the best way to do fusion?

There are a couple of possibilities for helium fusion here. If you can excuse the jargon for a moment, the temperatures required for a 21H (hydrogen) plus 32He (helium) reaction are significantly higher than conventional deuterium-tritium fusion. This process can still result in a few of those pesky neutrons so it may not be ideal. The alternative reaction, fusion of 32He with itself requires even higher temperatures to overcome the double positive charges on each helium. It therefore remains to be seen what is the best path forward in fusion. Other issues like how best to extract the energy once generated also loom. For example, it may be advantageous to directly drive electrical turbomachinery using charged protons without any heat conversion — although the claimed efficiencies of 70% would need to be fully vetted.

One thing we do know is that we need more helium-3 now. Our own DHS, for example, had hoped to detect the telltale neutron emissions of plutonium smuggled in shipping containers, but it was stalled for the lack of an affordable helium-3 source in our post-nuclear weapons economy. Getting this precious helium from the Moon will undoubtedly be difficult. The realization that it will take significant manpower — actual boots on the lunar surface — I think for now is inescapable in planning future missions. Mining, even if it is barely subsurface, will always be risky. Robots will have their place for sure, but they can not replace our versatility on the moon if they cannot even replace men at mines here.