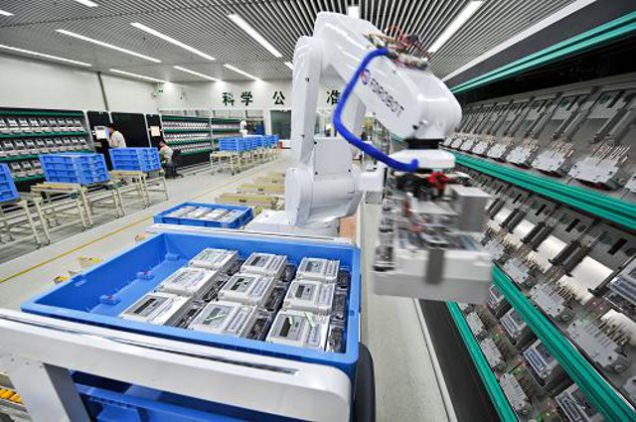 A company in South China’s Guangdong province is building the city’s first zero-labor factory. It’s an effort to address worker shortages and rising labor costs, but the rise of semi-autonomous “smart factories” could be a sign of things to come, in China and elsewhere.

As China Daily is reporting, local authorities in Guangdong are introducing its “robot assembling line” strategy. To start, private company Everwin Precisions Technology Ltd is expecting to deploy 1,000 robots by the end of the first phase of the zero-labor project. According to its board chairman, Chen Qixing, the company will reduce its workforce by 90%. So instead of employing its current 2,000 workers, the company will require just 200 employees to operate software systems and administration. Owing to a severe labor shortage and mounting labor costs, similar projects may be unveiled elsewhere around the Pearl River Delta.

China’s shrinking workforce may be a natural consequence of demographic trends, but it’s also likely the result of economic globalization. As the middle class emerges in China, so too do salary expectations and the desire for jobs outside the manufacturing sector. What’s more, the demand cannot be met through the influx of migrant workers. To stave off catastrophic production short-falls, China’s economists are advocating for technology upgrades and the use of smart robots.

To that end, the local government in Guangdong will invest the equivalent of $152-billion to replace humans with robots within three years. Robotic fleets could appear in as many as 2,000 companies across the province, in addition to two advanced industrial bases for robot production.

With factories run almost entirely by robots, it will become increasingly difficult for manufacturers outside of China to compete. Owing to similar demographic and economic trends elsewhere, this may force companies outside of China to adopt similar strategies. At the same time, advances in automation are increasingly poised to remove humans from assembly-line work. It’s not going to make sense for companies to maintain a workforce when it can just use robots. The zero-labor factories in China are likely just the start of what’s going to be a global trend.

Excess Logic provides free surplus equipment liquidation services to resell your hi-tech surplus equipment so you can get back up to 50% of proceeds. Connect with us 650-307-7553 to get more details about our equipment disposition, appraisal & remarketing program.