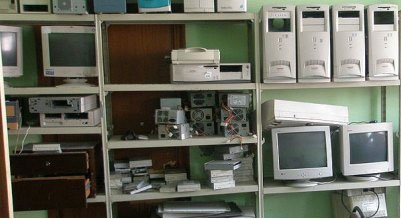 Electronics Recycling 101: The Problem With E-Waste

America’s love affair with consumer electronics will likely rage on for years to come. With a constant stream of iPads, e-readers and smart phones hitting the market, it’s hard not to get sucked into purchasing products. But embracing new technologies brings up a huge question: What do you do with the old stuff?

According to the Environmental Protection Agency (EPA), Americans generated about 3 million tons of electronic waste in 2007. Out of all that waste, only 13.6 percent of it was recycled — the rest wound up in landfills or was shipped to developing nations. The country’s growing mounds of e-waste are cause for concern both from a health and environmental perspective, so it’s important for consumers to properly dispose of unwanted electronics. Read on to learn how improperly discarded e-waste poses health, social and environmental problems.

“Electronics contain a variety of toxic components like lead, mercury, arsenic, beryllium and brominated flame retardants, some of which cause cancer and other adverse health effects,” says Kate Sinding, a senior attorney at theNatural Resources Defense Council (NRDC), an environmental non-profit. In fact, each individual piece of electronic equipment can contain enough toxins to make a person (or the earth!) seriously ill. According to the Electronics Takeback Coalition, one CRT monitor holds between four and eight pounds of lead. Flat-screen TVs use mercury lamps.

Because electronics contain so many toxins, it’s important not to throw them away with the regular trash. If e-waste gets sent to a landfill, chemicals can leech into groundwater and poison water systems, says Sinding. If they’re sent to an incinerator, all of those harmful compounds get emitted into the air, posing significant health risks to people who breathe that air in. Properly recycling used electronics can prevent noxious chemicals and heavy metals from winding up in the land and in our bodies. 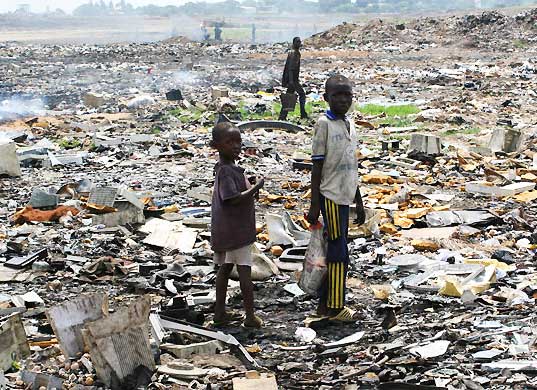 The Ugly Side of E-Recycling

Bringing discarded electronics to recycling or take-back centers is a noble action, but it’s important for consumers to only choose reliable programs. A 2008 report from the Government Accountability Office found that a substantial amount of America’s “recycled” electronics were actually shipped to developing nations like China, India and Africa.Workers in these locations, who are often women and children, disassemble products with their bare hands, exposing themselves to a host of toxins. Plus, electronics sometimes wind up sitting around in unlined pits, where chemicals can leech into soil and groundwater, poisoning the surrounding areas.

Exporting e-waste to developing nations should be illegal, and legislation is being introduced to do just that. But for now, the burden of picking reputable e-recyclers falls on consumers. To that end, consumers should ask every recycling, manufacturer, and retail take-back program if they use e-waste recyclers that are e-Stewards certified. TheBasel Action Network (BAN), a non-profit that works to prevent the globalization of toxic chemicals, launched the rigorous certification program last week. The certification ensures that recyclers are not exporting electronics to developing nations and that recycling is handled domestically using state-of-the-art protective measures.

To learn more about e-waste and how to properly recycle electronics, be sure to read the next installments of our Electronics Recycling 101 series.