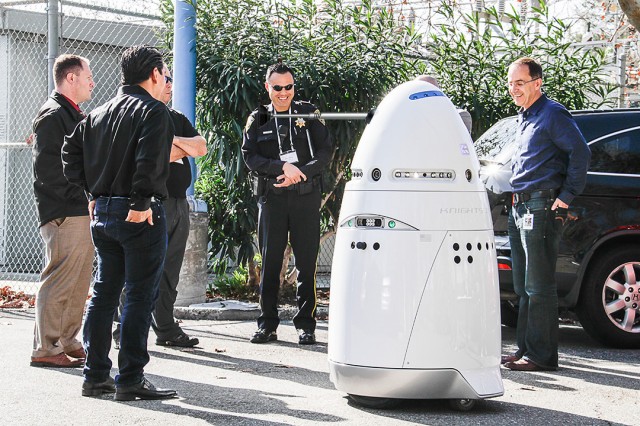 Showing a rather shocking disregard for the long-term safety of human civilization, Microsoft has become one of the first companies to deploy autonomous robot security guards. Dubbed the K5, Microsoft’s Silicon Valley campus was being policed last week by five of these roughly human-sized 300-pound (136 kg) robots, each equipped with enough cameras, sensors, artificial intelligence, and alarms that they can replace most human security patrols. Fortunately, despite looking like uncomfortably like a Dalek from the Doctor Who universe, the K5 is not (yet) equipped with a ray gun or any other method for harming or detaining humans.

The K5, built by the Californian company Knightscope, is billed rather euphemistically as an “autonomous data machine” that provides a “commanding but friendly physical presence.” Basically, it’s a security guard on wheels. Inside that rather large casing (it’s 5 foot tall!) there are four high-def cameras facing in each direction, another camera that can do car license plate recognition, four microphones, gentle alarms, blaring sirens, weather sensors, and WiFi connectivity so that each robot can contact HQ if there’s some kind of security breach/situation. For navigating the environment, there’s GPS and “laser scanning” (LIDAR I guess). And of course, at the heart of each K5 is a computer running artificial intelligence software that integrates all of that data and tries to make intelligent inferences — like,should I tell HQ about that large gathering of teenagers, or should that man be climbing in through that window? 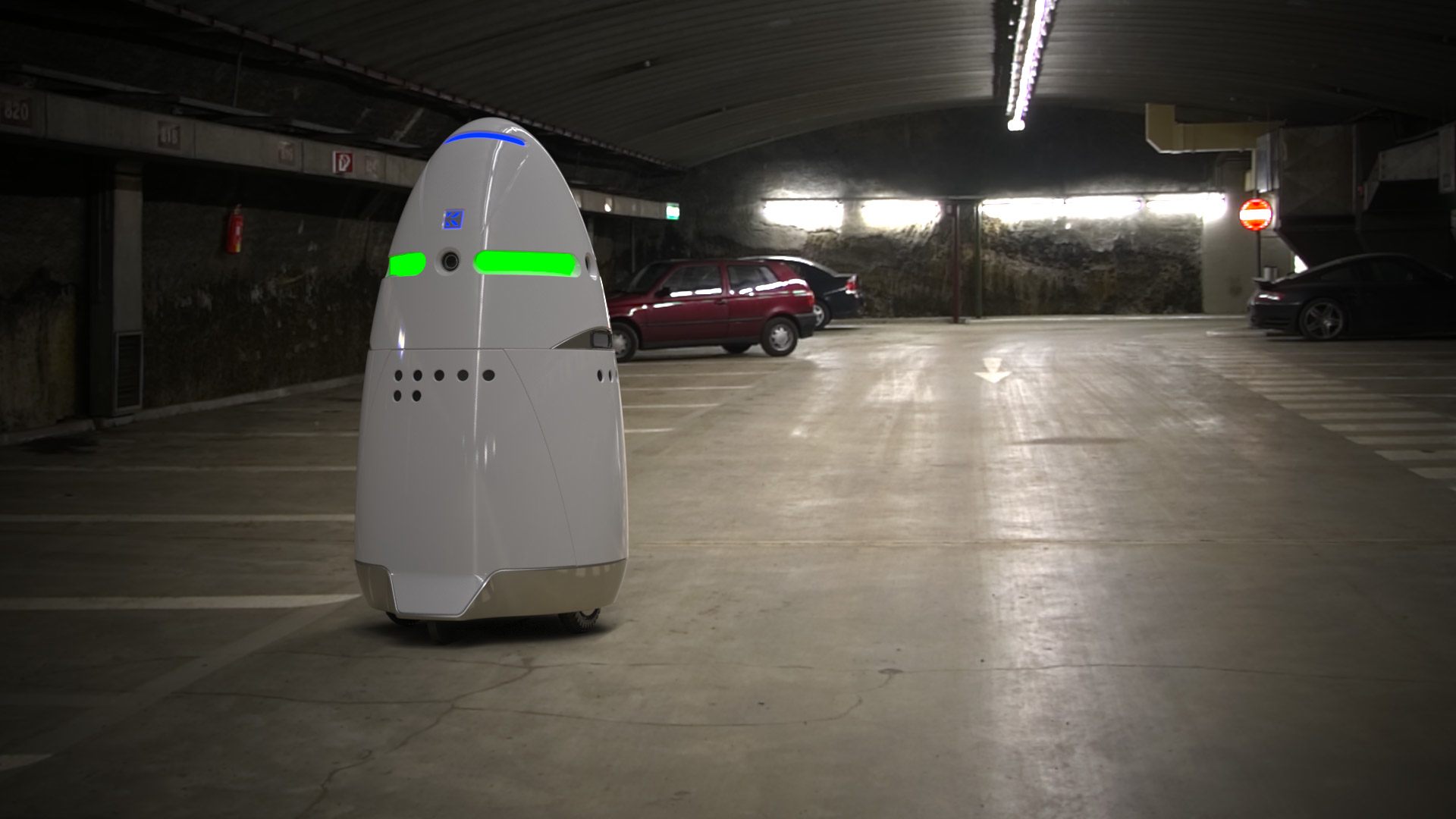 If a K5 decides that there’s a situation, it can use one of its built-in sirens to try and diffuse things — or it can message HQ to summon a human. If you step in front of the K5, or otherwise interfere with it, it will gently warn you with some chimes — but if you don’t move, an “ear-piercing alarm” is triggered. Other than its sirens and its rather imposing design, the K5 isn’t equipped with any weapons or other tools for resolving situations. (Does anyone else think it looks like the lovechild of a Dalek and EVE from WALL-E?) 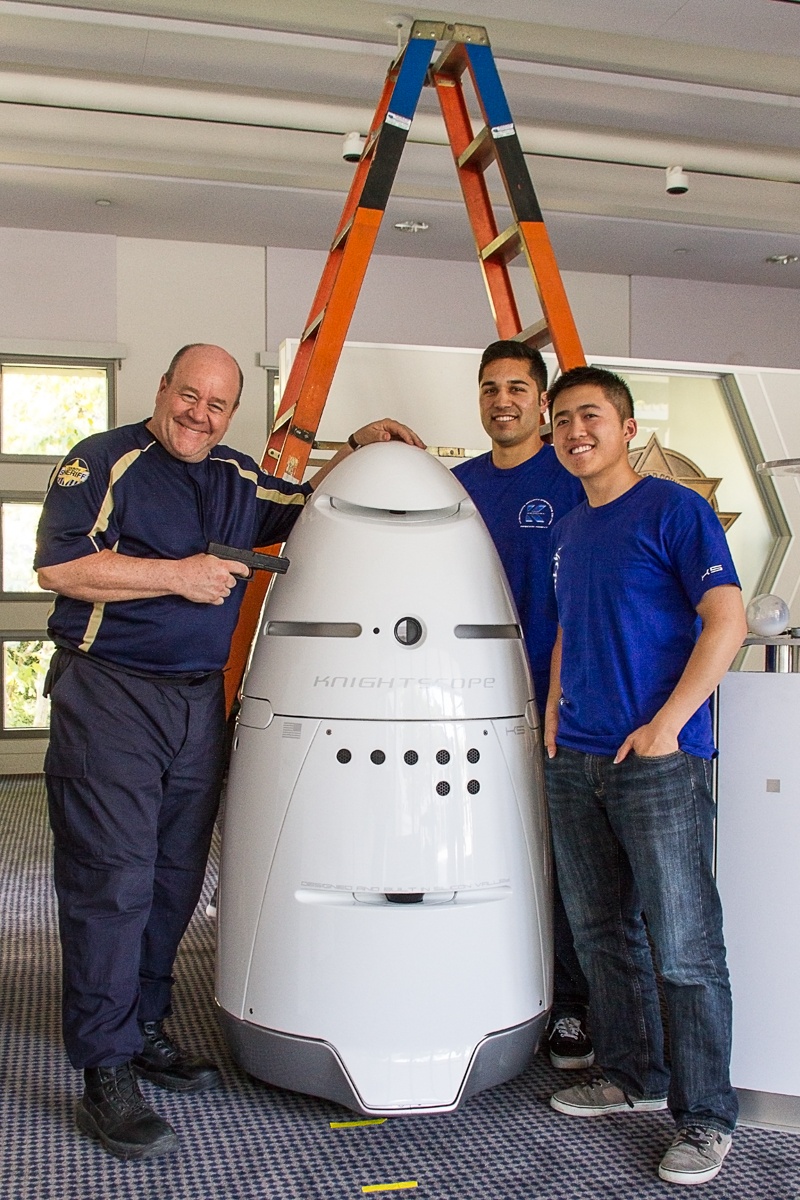 K5 isn’t just for catching criminals, either: If you find yourself in trouble/danger, there’s also a button on the top of the robot that summons help from HQ.

Learn how to recycle e-waste in San Jose

The purpose of the K5, like most robots, is straightforward: To replace expensive human workers. The K5 can run for around 24 hours on a single battery charge, automatically navigates back to the charging point when it’s running low, and only takes 15-20 minutes to recharge. Obviously, in the long run, this is cheaper and more efficient than a human security guard — plus, as technology improves, the K5 will probably be more vigilant and capable of spotting smaller discrepancies than a human. In theory, because of the lower cost, you could also field lots of K5 robots, reducing the number of potential holes in security coverage.

It goes without saying, though, that deploying a fleet of roughly human-sized, autonomous robots is just a little bit scary. At the very least, a 300-pound robot would cause a lot of damage if it ran into something — a car, a shop window, a child. In all likelihood, though, if these robotic security guards are popular, they’ll eventually be equipped with weapons — perhaps a taser for subduing a suspect, and a tear gas launcher for clearing groups of people. At that point, you need to be really sure that the AI is free of bugs.