Homepage / Blog / Environment / How clean is the water in your office? 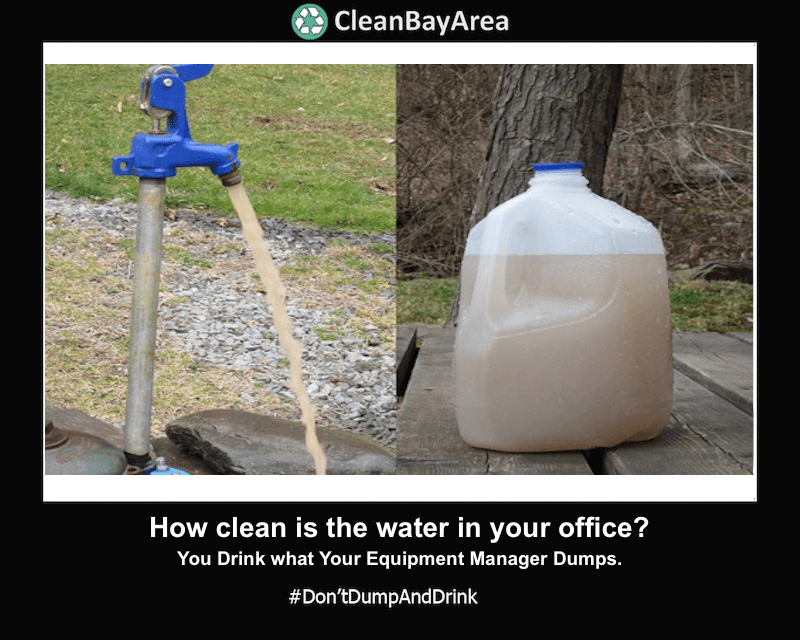 How clean is the water in your office?

Every year, Americans throw away enough paper and plastic cups, forks, and spoons to circle the equator 300 times. 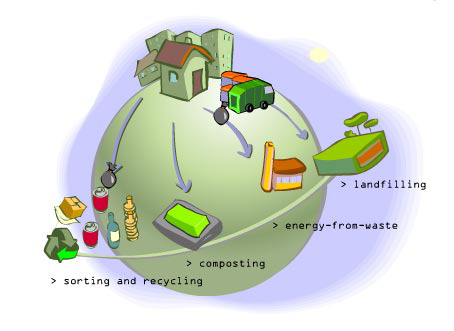 During 2009’s International Coastal Cleanup, the Ocean Conservancy found that plastic bags were the second-most common kind of waste found, at 1 out of ten items picked up and tallied.

Over 7 billion pounds of PVC are thrown away in the U.S. each year. Only 18 million pounds of that, about one quarter of 1 percent, is recycled.3
Chlorine production for PVC uses almost as much energy as the annual output of eight medium-sized nuclear power plants each year.

Plastic bags do not biodegrade. Light breaks them down into smaller and smaller particles that contaminate the soil and water and are expensive and difficult to remove.

When the small particles from photodegraded plastic bags get into the water, they are ingested by filter feeding marine animals. Biotoxins like PCBs that are in the particles are then passed up the food chain, including up to humans.

The City of San Francisco determined that it costs 17 cents for them to handle each discarded bag.

In 2003, 290 million tires were discarded. 130 million of these tires were burned as fuel.
In 2004, the Rubber Manufacturers Association estimated that 275 million tires were in stockpiles. Tires in stockpiles can serve as a breeding ground for mosquitoes and a habitat for rodents. Because they retain heat, these piles easily ignite, creating toxin-emitting, hard-to-extinguish fires that can burn for months.
The oil from just one oil change is enough to contaminate one million gallons of fresh water. Americans who change their own oil throw away 120 million gallons of reusable oil every year.

More than 2 billion books, 350 million magazines, and 24 billion newspapers are published each year.
The average American uses about the equivalent of one 100-foot-tall Douglas fir tree in paper and wood products each year.
The average office worker in the US uses 10,000 sheets of copy paper each year. That’s four million tons of copy paper used annually. Office workers in the US generate approximately two pounds of paper and paperboard products every day.

Airports and airlines recycle less than 20 percent of the 425,000 tons of passenger-related waste they produce each year. 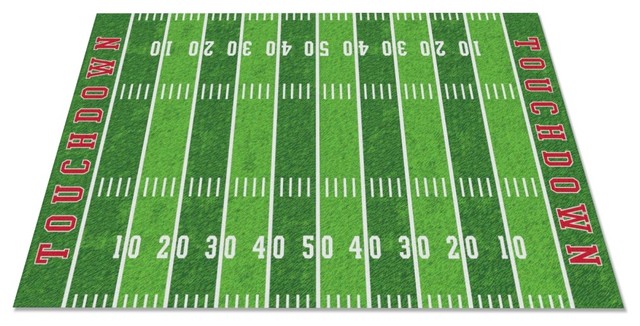 The estimated 2.6 billion holiday cards sold each year in the U.S. could fill a football field 10 stories high.

Between Thanksgiving and New Year’s, an extra million tons of waste is generated each week.

38,000 miles of ribbon are thrown away each year, enough to tie a bow around the Earth.

In 2008, the average amount of waste generated by each person in America per day was 4.5 pounds. 1.1 pounds of that was recycled, and .4 pounds, including yard waste, was sent to composting. In total, 24.3% of waste was recycled, 8.9% was composted, and 66.8% was sent to a landfill or incinerated.

The average American employee consumes 2.5 cans of soda each day at work.

The beverage industry used 46 percent less packaging in 2006 than in 1990, even with a 24 percent increase in beverage sales in that time. 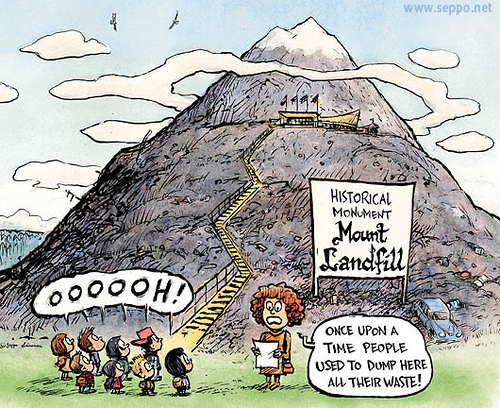 Although the EPA reports that approximately 33% of municipal waste is recycled, municipal waste makes up only a small portion of all waste generated. These waste statistics also leave out waste that is burned or landfilled in unpermitted landfills and incinerators, like burn barrels.
The barriers of all landfills will eventually break down and leak leachate into ground and surface water. Plastics are not inert, and many landfill liners and plastic pipes allow chemicals and gases to pass through while still intact.
In 2008, a survey of landfills found that 82 percent of surveyed landfill cells had leaks, while 41 percent had a leak larger than 1 square foot.
Newer, lined landfills leak in narrow plumes, making leaks only detectable if they reach landfill monitoring wells. Both old and new landfills are usually located near large bodies of water, making detection of leaks and their cleanup difficult.
Incinerators are a major source of 210 different dioxin compounds, plus mercury, cadmium, nitrous oxide, hydrogen chloride, sulfuric acid, fluorides, and particulate matter small enough to lodge permanently in the lungs.

In 2007, the EPA acknowledged that despite recent tightening of emission standards for waste incineration power plants, the waste-to-energy process still “create significant emissions, including trace amounts of hazardous air pollutants.”

Alaska has 300 landfill facilities, while the entire northeastern region of the United States only has 134.

While landfill gas is a good fuel, most landfills are not efficiently collecting it. The EPA estimates 75% gas collection efficiency, but some landfills are as low as 9 percent. The 2006 IPCC report used an estimated recovery efficiency of just 20 percent. Even Waste Management, the largest waste company in the United States, has admitted that it is impossible for them to reliably measure methane emissions at their landfills or develop a general model for estimating them.
Waste incinerators create more CO2 emissions than coal, oil, or natural gas-fueled power plants. 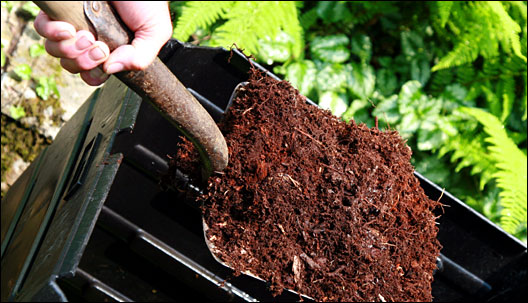 30,990 tons of food scraps were discarded in 2008, composing 18.6% of all materials going to landfills or incinerators.

American per capita food waste increased to more than 1,400 calories per person per day in 2009, an increase of approximately 50 percent since 1974.

Because microbes in compost can degrade some toxic organic compounds, including petroleum, compost is often used to restore oil-contaminated soils.
Compost’s organic matter and microbial content make it similar to wetland soils, and thereby useful for wetland restoration.
Immature composts, which work against plant growth, are used as natural mulches and mild herbicides.
In 2009, the EPA concluded that as much as 42 percent of U.S. greenhouse gas emissions could be avoided through strategies like recycling and composting.

Because incinerators are inefficient at generating electricity from burning waste, and recycling and composting conserve three to five times more energy than is produced by incinerating waste, the amount of energy wasted in the U.S. by not recycling is equal to the output of 15 medium-sized power plants.

The United States has more communities working towards Zero Waste goals than all of Europe. 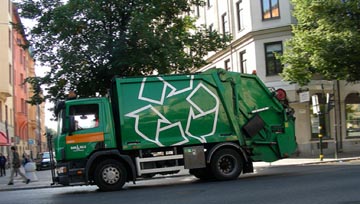 It has been estimated that recycling, re-use, and composting create six to ten times as many jobs as waste incineration and landfills.

Recycling saves 3 to 5 times the energy generated by waste-to-energy plants, even without counting the wasted energy in the burned materials.
Making a ton of paper from recycled paper saves up to 17 trees and uses 50 percent less water than does creating paper from virgin pulp.
In 2007, about 360 pounds of paper were recycled for each person in the U.S.

Glass food and drink containers made up 4% of all the waste generated in 2008. Only 28 percent were recycled.

In 2008, Americans recycled 7 million tons of metals, eliminating the equivalent of nearly 25 million metric tons of carbon dioxide, or taking 4.5 million cars off the road for one year.

Nearly 77% of all corrugated boxes were recycled in 2008.

Recycling 1 ton of mixed paper saves the energy equivalent of 185 gallons of gasoline.

Recycling 1 ton of aluminum cans conserves more than 207 million Btus, which is equal to 36 barrels of oil, or 1,665 gallons of gasoline.

The recycling rate of 32.5 percent in 2006 saved the carbon emission equivalent of taking 39.4 million cars off the road, and the energy equivalent of 6.8 million households’ annual energy consumption, or 222.1 million barrels of oil.
The aluminum can industry can make up to 20 cans from recycled aluminum with the same amount of energy it takes to make 1 completely new can.
Aluminum can be recycled forever with no loss of quality.
Recycling aluminum creates 97% less water pollution than making new metal from ore.
Every 3 seconds a baby is born. In that time, 140 cans are born.

Every ton of glass containers recycled saves over a ton of natural resources.

The energy saved by recycling one glass bottle can light a 100-watt light bulb for four hours or run a computer for 30 minutes.

Since 1960, the rate of office paper recycling has more than quadrupled.

63.4 percent of paper was recycled in 2009, an all-time high, according to the American Forest & Paper Association. 2009 was the first year the rate was over 60 percent.

If we recycled all of our aluminum cans for one year, we could save enough energy to light Washington, D.C. for 3.7 years.

A recycled aluminum can be back on the shelf in 60 days.

The amount of aluminum currently recycled in 1 year is enough to rebuild our entire airplane commercial fleet every 6 months. 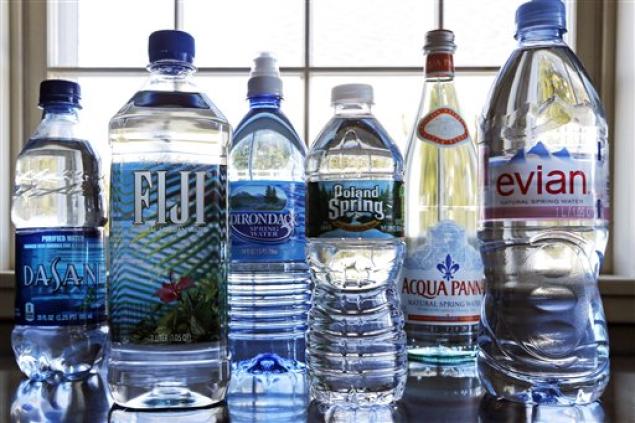 At least 90 percent of the price of a bottle of water is for things other than the water itself, like bottling, packaging, shipping and marketing.

44 percent of ‘purified’ bottled water sold in the U.S. started out as municipal water.

827,000 to 1.3 million tons of plastic PET water bottles were produced in the U.S. in 2006, requiring the energy equivalent of 50 million barrels of oil. 76.5 percent of these bottles ended up in landfills.

26 to 41 percent of the 2.4 million tons of PET plastic discarded every year is bottled water bottles.

Because plastic water bottles are shielded from sunlight in landfills, they will not decompose for thousands of years.

It takes about 1,100 to 2,000 times as much energy to produce and transport the average bottle of water to Los Angeles as to produce the same amount of tap water.

Of the 2.25 million tons of electronics (TVs, cell phones, computers, etc) retired in 2007, 82 percent were discarded, mostly to landfills.

About 304 million electronics were disposed of from US households in 2005. Two-thirds of them still worked.

If we recycled all of the cell phones retired each year, we would save enough energy to power 18,500 homes for a year.

In 2007, 82 percent of retired televisions and computers were discarded, mostly to landfills.

In 2005, 61 percent of CRT monitors and televisions collected for recycling were sent abroad for remanufacture or refurbishment, mostly to Asia or South America. Another 14 percent was sent abroad for glass-to-glass processing.

Recycling one million cell phones allows 35,274 pounds of copper, 772 pounds of silver, 75 pounds of gold, and 33 pounds of palladium to be recovered.