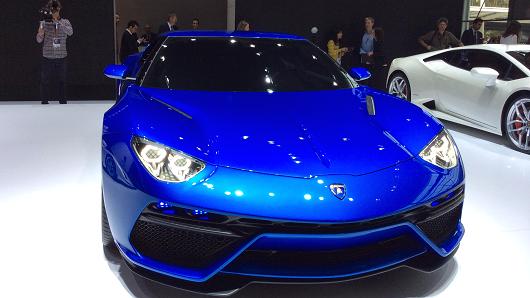 Lamborghini’s Asterion LPI 910-4 concept was one of the most hotly anticipated unveilings of the Paris Motor Show, and the Italian supercar maker didn’t disappoint.

The electric blue Asterion on display in Paris has been surrounded by cameras and curious onlookers since its unveiling Thursday. Lamborghini boss Stephan Winkelmann says the low-slung speedster is the first ever plug-in gas-elecric hybrid in Lamborghini’s history.

INSIDE: Ivory leather, aluminum, forged carbon and titanium create a luxurious cabin. Storage space has been increased compared with other Lamborghinis, although no one is calling it roomy. A removable tablet controls audio, air conditioning and mapping features.

OUTSIDE: The Asterion, named after the mythical Minotaur in a nod to Lamborghini’s tradition of naming all its cars after bulls, features more curves and almost none of the sharp angles that have been the hallmark of most recent Lamborghini designs. While its looks are different than the Aventador or Huracan, the Asterion remains unmistakably a Lamborghini.

UNDER THE HOOD: The plug-in hybrid is set up with a V10 aspirated engine and three electric motors, with a lithium battery under the center console. It boasts zero-to-100 km acceleration of 3 seconds and a top speed of 320 kilometers an hour.

GAS MILEAGE: Lamborghini says that the Asterion has a range of 50 km (30 miles) using the electric battery alone.

CHEERS: The curvy good looks. Lamborghini power and styling for those who don’t like their cars to look like aggressive enemy spacecraft.

JEERS: It’s only a concept.