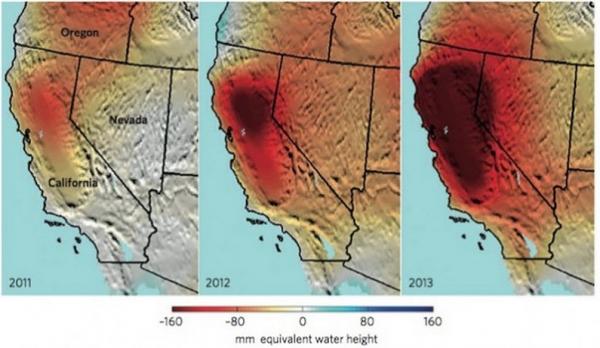 NASA Scientist Warns “California Has One Year Of Water Left”

Given the historic low temperatures and snowfalls that pummeled the eastern U.S. this winter, it might be easy to overlook how devastating California’s winter was as well.

As our “wet” season draws to a close, it is clear that the paltry rain and snowfall have done almost nothing to alleviate epic drought conditions. January was the driest in California since record-keeping began in 1895. Groundwater and snowpack levels are at all-time lows. We’re not just up a creek without a paddle in California, we’re losing the creek too.

Data from NASA satellites show that the total amount of water stored in the Sacramento and San Joaquin river basins — that is, all of the snow, river and reservoir water, water in soils and groundwater combined — was 34 million acre-feet below normal in 2014. That loss is nearly 1.5 times the capacity of Lake Mead, America’s largest reservoir.

Statewide, we’ve been dropping more than 12 million acre-feet of total water yearly since 2011. Roughly two-thirds of these losses are attributable to groundwater pumping for agricultural irrigation in the Central Valley. Farmers have little choice but to pump more groundwater during droughts, especially when their surface water allocations have been slashed 80% to 100%. But these pumping rates are excessive and unsustainable. Wells are running dry. In some areas of the Central Valley, the land is sinking by one foot or more per year.

As difficult as it may be to face, the simple fact is that California is running out of water — and the problem started before our current drought. NASA data reveal that total water storage in California has been in steady decline since at least 2002, when satellite-based monitoring began, although groundwater depletion has been going on since the early 20th century. 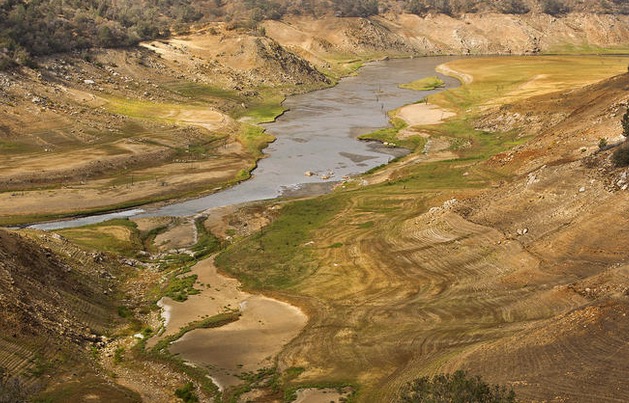 Right now the state has only about one year of water supply left in its reservoirs, and our strategic backup supply, groundwater, is rapidly disappearing. California has no contingency plan for a persistent drought like this one (let alone a 20-plus-year mega-drought), except, apparently, staying in emergency mode and praying for rain.

In short, we have no paddle to navigate this crisis.

First, immediate mandatory water rationing should be authorized across all of the state’s water sectors, from domestic and municipal through agricultural and industrial. The Metropolitan Water District of Southern California is already considering water rationing by the summer unless conditions improve. There is no need for the rest of the state to hesitate. The public is ready. A recent Field Poll showed that 94% of Californians surveyed believe that the drought is serious, and that one-third support mandatory rationing.

Second, the implementation of the Sustainable Groundwater Management Act of 2014 should be accelerated. The law requires the formation of numerous, regional groundwater sustainability agencies by 2017. Then each agency must adopt a plan by 2022 and “achieve sustainability” 20 years after that. At that pace, it will be nearly 30 years before we even know what is working. By then, there may be no groundwater left to sustain.

Third, the state needs a task force of thought leaders that starts, right now, brainstorming to lay the groundwork for long-term water management strategies. Although several state task forces have been formed in response to the drought, none is focused on solving the long-term needs of a drought-prone, perennially water-stressed California.

Our state’s water management is complex, but the technology and expertise exist to handle this harrowing future. It will require major changes in policy and infrastructure that could take decades to identify and act upon. Today, not tomorrow, is the time to begin.

Finally, the public must take ownership of this issue. This crisis belongs to all of us — not just to a handful of decision-makers. Water is our most important, commonly owned resource, but the public remains detached from discussions and decisions.

This process works just fine when water is in abundance. In times of crisis, however, we must demand that planning for California’s water security be an honest, transparent and forward-looking process. Most important, we must make sure that there is in fact a plan.