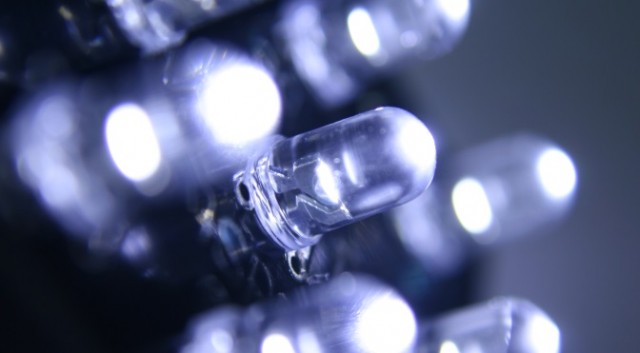 Over the past 15 years, WiFi has gone from a curiosity to a common feature — it’s not uncommon for desktop systems to ship with WiFi adapters these days. This explosion in capacity and performance has created a significant spectrum crunch that’s left multiple companies hunting for new spectrum or creative ways of re-using existing bandwidth. One potential alternative to WiFi is the use of so-called “Li-Fi”, or visible light — and a group at the University of St. Andrews has found a series of polymers that dramatically boost transmission speeds over anything WiFi can achieve.

The advantage of using visible light

The first thing to understand is that Li-Fi encodes data in nanosecond pulses of visible light. While this might sound like a non-starter — nobody wants to stand under an 802.11 strobe light — the pulses occur on a nanosecond scale, which is far shorter than anything the human eye can perceive. One common criticism of Li-Fi is that the technology is limited to direct line-of-sight transmission (though light reflected off walls can be used to ‘bounce’ signal into a room or area) but this is increasingly a problem for next-generation Wi-Fi signals as well. We’ve covered the potential use of 60GHz WiFi before at ET, but 60GHz signaling has an effective range of a few meters — anything past that, and someattenuating object (suspects include leaves, clothing, and the cat) is likely to block the signal. 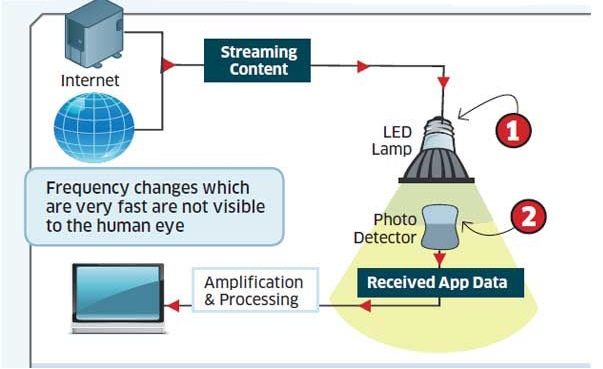 The visible spectrum offers a theoretical solution to the WiFi crunch simply by virtue of its size — it’s 10,000x larger than the current slice of spectrum used for WiFi and researchers have demonstrated transmission rates of up to 4Gbps. That’s not quite as fast as the 60GHz WiFi that Samsung demoed in October, but the same group of researchers expects to hit 15Gbps by later this year — and that’s markedly faster than anything else proposed for the wireless market.

One of the sticking points for the St. Andrews team has been finding a way to generate a “natural” white light that looked good to humans while simultaneously achieving high data throughput. The goal of the research was to create a polymer that could be combined with current LED technology to create a device that could simultaneously provide illumination and data transmission.

Typical LEDs use phosphor coatings to shift the light emitted by the blue diode into a spectrum more pleasing to the human eye. The problem with traditional phosphors is that they photoluminesce over a period of microseconds — far too long to hit the nanosecond times required for effective Li-Fi transmission.

What the St. Andrews team found is that an organic polymer (BBEHP-PPV) can be used to absorb some of the light from an indium-gallium nitride LED and reemit it as green, while another PPV derivative (MEH-PPV) can absorb energy from the BBEHP-PPV and re-emit it as orange-red light. The team characterizes the final result as a “higher quality white light than previous efforts at smart lighting” and claims it’s “in the right ballpark.” The proof of concept device achieved transmission rates of 350Mbit over 5cm — 35x faster than inorganic phosphors in an equivalent test.

While the 350Mbit rate is still much lower than what previous demonstrations have shown, those demos were done using conventional blue, green, and red lights rather than a pure white light. This last is important if LiFi is to ever take off for general consumer or business use. Dedicated diodes might work for professional demonstations, but few users would ever want a brilliant source of any of these lights hanging out in a light fixture — much less in a fixture designed to throw light across an entire room.

Li-Fi’s adoption as a transmission standard is anything but certain, but the idea does have a certain appeal — visible light could be used to literally bathe certain areas in spectrum coverage where existing networks choke and die under load and the attenuation from Li-Fi should be no worse than what we already see with current high-frequency Wi-Fi standards.