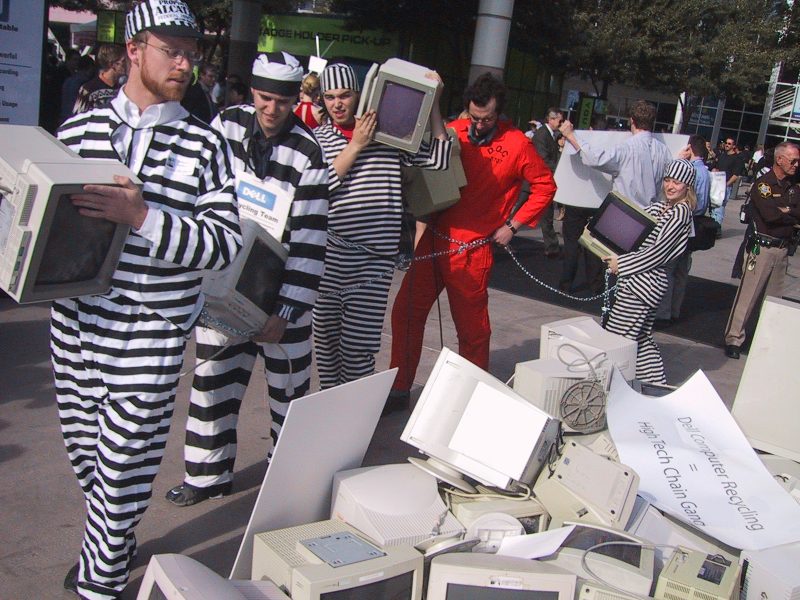 People are often surprised to learn that our federal government operates prison-based recycling plants. UNICOR, a company that is wholly-owned by the federal Department of Justice, operates several businesses within the federal prison system, including electronics recycling in seven federal prisons. Founded in 1934 as a work program to keep prisoners occupied, UNICOR has become a large government contractor, generating over $765 million in sales in 2005. The federal government uses UNICOR as its primary electronics recycler.

Over the past few years, a storm of complaints about UNICOR’s recycling program from prisoners, prison guards, and others has brought these hidden sweatshops into public view. It led the Silicon Valley Toxics Coalition and the Center for Environmental Health, along with Prison Activist Resource Center and the Electronics TakeBack Coalition to publish a report in 2006 exposing horrific conditions inside the prison recycling plants. See below for report.

In October 2010, the Inspector General concluded a multi-year investigation of UNICOR’s recycling operations and issued a scathing report having found numerous violations of health, safety, and environmental laws and regulations, as well as “gross misconduct” by staff working for the Federal Prison Industries. More. 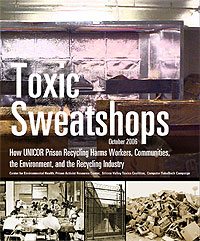 Key Findings of the Report

UNICOR has failed to adequately protect prisoners and staff from exposure to toxics.

When dismantling electronics, prisoners handling toxic components need ventilation, proper tools, and adequate protective gear, as do prison staff working in the area. UNICOR facilities repeatedly failed to provide proper recycling procedures to captive laborers and staff supervisors. UNICOR’s policy of measured modernization- limiting automation in order to maximize the number of prisoners who work-increases the risk of workplace injuries to prisoners and guards. The adverse health effects of long-term exposure to the toxic materials in e-waste are costs that families and/or public health services will bear- not UNICOR.

UNICOR has failed to protect communities from hazardous materials.

Poor workplace safety practices affect communities as well. Whistleblower Leroy Smith, a prison health and safety manager, has expressed concerns about prison guards who go home to their families with dust on their clothes. Smith’s attorney Mary Dryovage and Jeff Ruch, director of Public Employees for Environmental Responsibility, have noted that Smith’s claims “were not fully investigated,” including charges that UNICOR disposed of “hazardous metals” and “contaminated mopheads…at county landfills” and that “mop water would be disposed down sewage drains, which would be released into the city waste water treatment plant.”

Not all electronics recyclers are the same. Much of what passes as “electronics recycling” is exporting harm – dumping e-waste on poor communities in China, India, Pakistan, Nigeria, and other countries. However, a growing segment of the U.S. electronics recycling industry is taking concrete steps to educate and to protect workers, communities, and the environment. These recyclers are being undermined by UNICOR’s government sweatshop model. UNICOR’s low wages, limited worker protections, and use of outdated equipment allow UNICOR to underbid conscientious commercial recycling operations.

Selected Quotes from the Report:

“Federal employees and prisoners inhaling poisons due to the neglect of their superiors, and federal agencies whitewashing the investigation. It sounds like a Hollywood dramatization like Shawshank Redemption, or a John Grisham novel with wild conspiracy theories. In this case, however, workers and inmates were exposed to hazardous materials without protection… and the Bureau of Prisons and Federal Prison Industries did nothing to stop it, and indeed frustrated attempts to investigate the matter… Now some people might say, prisoners getting poisoned? What’s the big deal? Who cares? We do.”

“What I and others think is the funniest thing about this recycling plant is that the STATE made it illegal to dispose of computers and computer peripherals in their waste and garbage dumps, because it is hazardous to the health of STATE citizens. Guess who our biggest provider of old and recyclable computers and monitors is?? Yup, you guessed it: the good ol’ STATE!!! They are too dangerous for their law-abiding citizens, who need to be protected, but they aren’t too hazardous to federal prison inmates incarcerated in STATE, who are not given all the information, the correct or adequate tools…and who are not being given adequate safety gear to protect them from the hazardous wastes that the citizens are being protected from. Ironic, isn’t it??!!” – Prisoner A

In November 2007, NIOSH found staff and inmates were exposed to concentrations of lead and cadmium far above permissible limits in Elkton’s industry computer recycling plant but the plant was not shut down until this June.

In December of 2011, Rep. Bill Huizenga introduced H.R. 3634, the Federal Prison Industries Competition in Contracting Act of 2011, which removes, to some extent, the requirements that federal agencies give UNICOR preferential treatment in contracting goods or services.

“This bill requires the government agencies to at least open these contracts to the private sector as well for bidding, or requires them to shop around for the best value for the taxpayers’ dollar. The bill preserves market access for these products or services to the hard-working men and women of our districts. This is simply one more easy, common-sense way to preserve jobs and help restore economic security for America,” Huizenga said in a February 2012 statement.