This story is steeped in conditional phrases and the trademark weirdness of quantum science, but for all that, it has serious implications for computing and for our basic understanding of physics. A team of researchers has managed to (very technically) break Newton’s third law of motion — that every action has an equal and opposite reaction — by accelerating laser pulses around a loop seemingly without any corresponding push-back.

The principles behind this breakthrough are airy new-physics ideas like “negative mass,” but the results are simple enough, and speak for themselves. With this team’s device, it’s possible for two pulses of light to both accelerate each other in the same direction through an optical cable, potentially paving the way for advances in everything from communications to computing — with just a hint of starship engineering thrown in for fun.

The team refers to their device as an optical diametric drive, a very tenuous but still instructive comparison that refers to a hypothetical engine tech that could get humans to the stars. A diametric drive is basically an anti-gravity system that uses a block of material with negative mass to create a negative gravitational field that would endlessly repel an object with actual mass (a spaceship). If that sounds like utter fantasy, that’s because it is; the concept of negative gravity has no meaning in quantum physics, which works using mass-squared equations that make all negative mass parameters into positive ones. The idea of moving through space thanks to a block of material with a never-ending propulsive ability calls to mind the perpetual motion machines of days gone by. 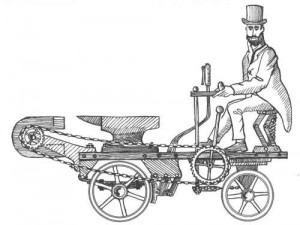 But could those old attempts have simply been too literal with their terminology? Though nothing remotely like an anti-gravity material has yet been found, light can have a negative effective mass if manipulated just right — and that’s what this team’s device is designed to do. The system takes pulses of light and splits each one between two connected fiber-optic loops of different length. Since the pulse takes a different amount of time to circle each loop, the result over many pulses is a complex interference pattern that causes the theoretically mass-less photons to behave as though they have mass. Precisely the right interference pattern will lead to an effectively negative mass. That’s certainly tidy, but could such obsessing over technicalities have actual, physical benefits?

Just as a block of negative mass would accelerate a starship; it seems that a photon of negative effective mass will accelerate a more conventional one. When two pulses with respectively positive and negative effective masses interact within the loops, they accelerate in the same direction. In the experiment, the team observed that once the system was up and running, both the positive and negative mass photons passed the detector just a little bit faster with every revolution. This required no extra energy input on their part. 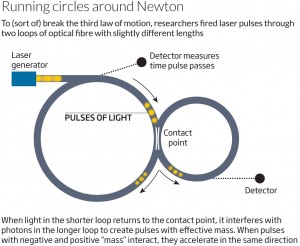 This principle could potentially work with anything that can attain an effective mass — most notably, electrons in a semiconductor. The team suggests that their work could lead to everything from faster communications to more powerful computers, but those are likely almost as far out as interstellar anti-gravity drives. Of course, it’s fun to imagine chips with built-in accelerators, but the most realistic proximate impact of this research is for simple understanding. These pulses seem to slip through a loophole in Newton’s third law of motion, and it will be important to understand why playing with such technicalities still seems to have real-world impacts.

This study shows that even seemingly meaningless concepts can have real implications in modern physics; quantum physics may be a loopy mess of seemingly impossible concepts, but acting as if those concepts are true lets you put a man on the Moon and connect the world through global communications. This study implies that while negative mass might not actually exist, the concept itself could still let us find ways around previously impassable barriers.