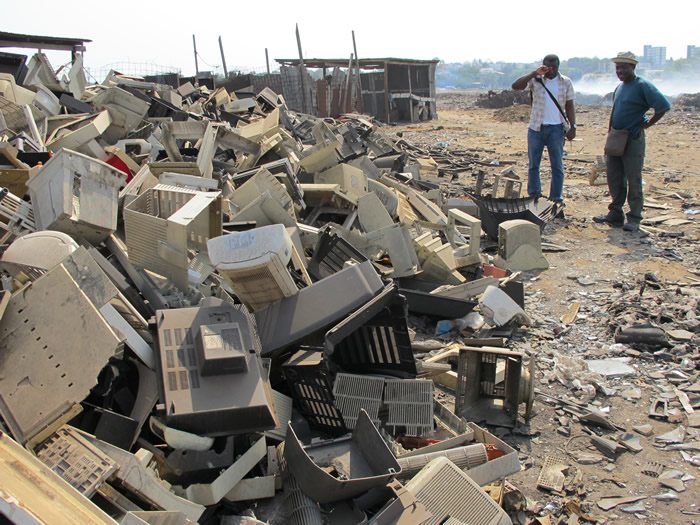 When we drop off our old computers at an e-waste collection event, or have a recycler come and get them from our offices, we want to believe that the recycler is going to do the right thing: to reuse them if possible, and handle them in ways that are safe for workers and the environment. Electronics contain many toxic chemicals, and so a responsible recycler is one that is making sure that he – and the other vendors he may sell parts or materials to – is managing all aspects of the business as safely as possible.

The problem is that many electronics recyclers don’t actually recycle the electronics they collect from us. They can make more money by selling old electronic products to exporting waste traders than by processing it here in the U.S.  Traders send it to developing countries where workers earn extremely low wages (often a few dollars per day) and where health and safety and environmental laws, enforcement, infrastructure and citizens’ rights are very weak.

Simply stated, we are solving our e-waste problem by exporting it to poor countries around the globe. 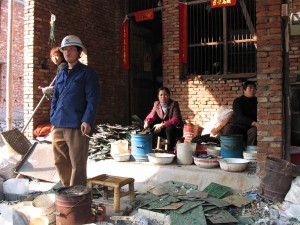 In these countries, the e-waste ends up in backyard recycling operations, often literally behind peoples’ homes. One example is Guiyu, China, an area where a lot of our e-waste goes. They use crude and unsafe methods of taking apart our old computers and TVs to get to and remove the metals, which they can sell, causing great harm in the process. These dangerous practices include:

These horrific working conditions plus weak labor standards in China and many of the other developing countries where e-waste is sent, mean that women and children are often directly exposed to lead and other hazardous materials. 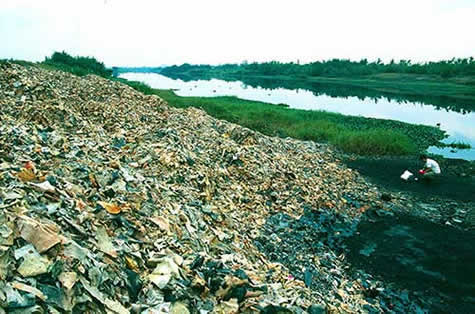 In 2001, the Basel Action Network (BAN) led several groups in an investigation of e-waste processing in China, India, and Pakistan. The investigation uncovered an entire area known as Guiyu in Guangdong Province, surrounding the Lianjiang River just 4 hours drive northeast of Hong Kong where about 100,000 poor migrant workers are employed breaking apart and processing obsolete computers imported primarily from North America. The workers were found to be using 19th-century technologies to clean up the wastes from the 21st century. 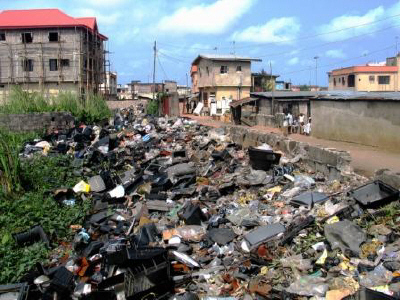 Digital Dump: Exporting Reuse and Abuse to AfricaIn 2005, BAN produced a film and report on e-waste export to Africa, for the reuse market, called “Digital Dump: Exporting Reuse and Abuse to Africa.” This shocking film shows how a large quantity of the computers exported to Lagos, Nigeria supposedly for reuse are really mostly non-working, non-repairable trash. With no real electronics recycling infrastructure, Lagos ends up burning these toxics-laden products in open pits, very close to residential areas.

How much e-waste do we export each year?

There have been no rigorous studies of exactly how much e-waste we export to developing nations. Industry experts estimate that of the e-waste that recyclers collect, roughly 50-80 % of that ends up getting exported to developing nations. That would mean that we export enough e-waste each year to fill 5126 shipping containers (40 ft x 8.5 ft). If you stacked them up, they’d reach 8 miles high – higher than Mt Everest, or commercial flights.

In August 2008, the federal Government Accountability Office (GAO) published a scathing report on e-waste exports from the us, finding that “a substantial amount ends up in countries such as China and India, where they are often handled and disposed of unsafely. These countries often lack the capacity to safely handle and dispose of  used electronics if the units are not in reusable condition when received, and the countries’ extremely low labor costs and the reported lack of effective environmental controls make unsafe recycling commonplace.”

CNN Report: “China: The electronic wastebasket of the world”