Homepage / Blog / Alternative energy / Solar and wind power are now fully cost competitive with fossil fuels – is it time to switch over?

Solar and wind power are now fully cost competitive with fossil fuels – is it time to switch over?

Renewable energy production has boomed across the globe in recent years, driven by improvements to solar and wind turbines, increased economies of scale, and in some cases, significant government subsidies. This, in turn, has sparked a great many conversations over whether or not renewables are sufficiently advanced to provide significant amounts of base load power, the estimated cost of transitioning away from fossil fuels, and the timeline for transitioning from hypercompressed prehistoric plant matter to solar or wind power.

A new report from financial advisory and asset management firm Lazard finds that the unsubsidized cost of solar and wind power has already reached parity [PDF] with conventional fossil fuels in many parts of the United States.

The improvements in just the past five years are striking. The graph below shows the Levelized Cost of Energy (LCOE) for unsubsidized wind and solar buildouts. The cost ranges listed above each data point reflect different areas of the United States.

Solar power remains significantly more expensive than wind power throughout most of the country, but costs are expected to continue to fall, from a range of $180 to $265 per megawatt-hour (MWh) in 2014 for rooftop-mounted solar, to a range of $109 to $151 per MWh in 2017.

The unsubsidized price of energy has already reached parity in some markets and areas of the United States, as shown below:

Obviously the applicability of these findings depends on where you live; Texas has a very different mix of wind and solar capacity than Maine does. Nonetheless, the implication is clear — in many cases, renewable power is now competitive with fossil fuels, even with no subsidies.

The base load question

The larger question that Lazard doesn’t address is when alternative energy capabilities will be sufficient to take over generating base load power. The term base load refers to a power plant that generates electricity steadily and on a 24-hour cycle as opposed to a “peaker” plant which cycles up only to meet increased daytime demand and shuts down when its output isn’t necessary.

Geothermal and hydropower plants are already used for base load power in some areas of the United States, but both of these methods rely on specific geological features that aren’t available across the entire country. Solar thermal plants and huge battery installations are both hypothetically capable of providing base load power, but both of these technologies are still under development and face formidable scaling problems.

Recent research from the International Energy Agency speaks to the difficulty of adopting systems that rely heavily on renewable energy. According to the IEA, the existing grid can accommodate up to 10% renewable sources essentially for free, meaning operators don’t need to modify their control or switching systems to take full advantage of the new capacity. Past the 10% mark, existing electrical grids need to be intelligently “re-optimized.” the IEA notes that building out these networks in developed nations, where a fully functional power grid already exists, is an extremely challenging endeavor. It’s much easier for a country like China, Brazil, or India to build a modern “smart grid” than it is for nations like the United States. 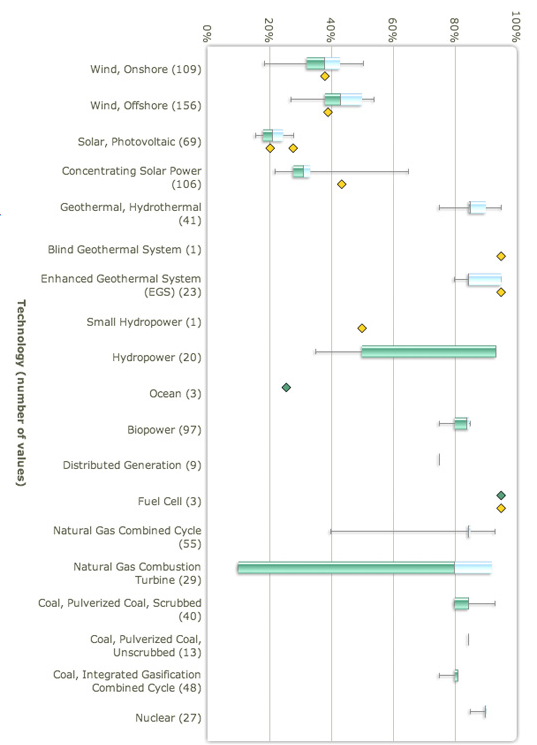 Beyond the cost of power

As the price of solar and wind power falls, resistance to their adoption should also dissipate, at least in part. Much of the pushback in the United States has focused on whether or not climate change actually exists, or the false idea that the government shouldn’t promote energy research or grant subsidies. The fact that similar programs exist for conventional energy sources and have existed for decades is typically swept under the table. 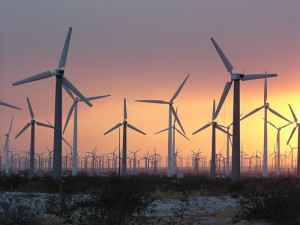 The long-term feasibility of widespread renewable adoption, however, will depend on more than the total cost of energy. Renewable plants often have much lower capacity factors than the coal and gas-fired facilities they replace, which means that while a coal plant might produce power 80% of the time, a wind turbine might only generate electricity 40% of the time. This means you need two wind turbines for every coal plant — and since one coal plant produces far more electricity than one wind turbine, the footprint of a wind farm is much larger than an equivalent coal plant.

Concerns over land use, pollution, up-front costs, and long-term environmental impacts are all issues that go beyond the simple cost of energy, but they’re all likely to be front and center of the larger debate over the United States’ energy policy. Proponents of a 100% renewable future have argued that high efficiency and innovative energy storage mechanisms can eliminate the need for traditional base load power generation. I’m skeptical on that point for the simple reason that storage mechanisms that work well enough on an a household level can’t necessarily scale to national or even regional deployments.

Bringing solar and wind costs into line with conventional power across the nation won’t solve the challenge of upgrading the electrical grid to meet the needs of the 21st century, but it’s a vital first step.