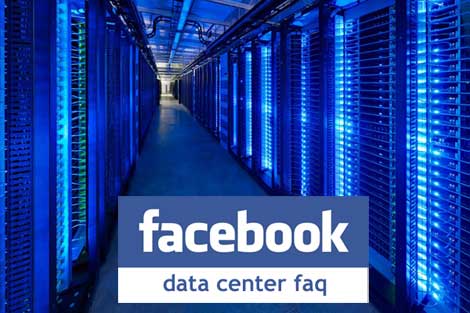 With more than 900 million active users, Facebook is the busiest site on the Internet and has built an extensive infrastructure to support this rapid growth. The social networking site was launched in February 2004, initially out of Facebook founder Mark Zuckerberg’s dorm room at Harvard University and using a single server. The company’s web servers and storage units are now housed in data centers around the country.

Each data center houses thousands of computer servers, which are networked together and linked to the outside world through fiber optic cables. Every time you share information on Facebook, the servers in these data centers receive the information and distribute it to your network of friends.

We’ve written a lot about Facebook’s infrastructure, and have compiled this information into a series of Frequently Asked Questions. Here’s the Facebook Data Center FAQ (or “Everything You Ever Wanted to Know About Facebook’s Data Centers”).

How Big is Facebook’s Internet Infrastructure?

Facebook is currently the world’s most popular web site, with more than 1 trillion page views each month, according to metrics from Google’s DoubleClick service. Facebook currently accounts for about 9 percent of all Internet traffic, slightly more than Google, according to HitWise.

To support that huge activity, Facebook has built two huge data centers, has two more under construction, and leases additional server space in at least nine data centers on both coasts of the United States. More than 70 percent of Facebook’s audience is in other countries, prompting Facebook to announce its first non-U.S. data center in Lulea, Sweden.

The company’s massive armada of servers and storage must work together seamlessly to deliver each Facebook page, the company said. “Loading a user’s home page typically requires accessing hundreds of servers, processing tens of thousands of individual pieces of data, and delivering the information selected in less than one second,” the company said.

For most of its history, Facebook has managed its infrastructure by leasing “wholesale” data center space from third-party landlords. Wholesale providers build the data center, including the raised-floor technical space and the power and cooling infrastructure, and then lease the completed facility. In the wholesale model, users can occupy their data center space in about five months, rather than the 12 months needed to build a major data center. This has allowed Facebook to scale rapidly to keep pace with the growth of its audience.

Where are Facebook’s Data Centers Located?

In January 2010 Facebook announced plans to build its own data centers, beginning with a facility in Prineville, Oregon. This typically requires a larger up-front investment in construction and equipment, but allows greater customization of power and cooling infrastructure. The social network has since announced plans for data centers in Forest City, North Carolina (November 2010) andLulea, Sweden (October, 2011). The company has brought the facilities in Prineville and North Carolina online, and begun work on second data centers on both campuses.

Facebook currently leases space in about six different data centers in Silicon Valley, located in Santa Clara and San Jose, and at least one in San Francisco. The company has also leased space in three wholesale data center facilities in Ashburn, Virginia. Both Santa Clara and Ashburn are key data center hubs, where hundreds of fiber networks meet and connect, making them ideal for companies whose content is widely distributed.

If Facebook’s growth continues at the current rate, it will likely require a larger network of company-built data centers, as seen with Google, Microsoft, Yahoo and eBay.

How Big Are Facebook’s Server Farms?

As Facebook grows, its data center requirements are growing along with it. The new data center Oregon was announced as being 147,000 square feet. But as construction got rolling, the company announced plans to add a second phase to the project, which will add another 160,000 square feet. That brings the total size of the Prineville facility to 307,000 square feet of space – larger than two Wal-Mart stores. The North Carolina facility is about the same size.

In the leased data centers where it operates, Facebook typically leases between 2.25 megawatts and 6 megawatts of power capacity, or between 10,000 and 35,000 square feet of space. Due to the importance of power for data centers, most landlords now price deals using power as a yardstick, with megawatts replacing square feet as the primary benchmark for real estate deals.