Homepage / Blog / Computing / The first human brain-to-brain interface has been created. In the future, will we all be linked telepathically?

The first human brain-to-brain interface has been created. In the future, will we all be linked telepathically?

International researchers are reporting that they have built the first human-to-human brain-to-brain interface, allowing two humans — separated by the internet — to consciously communicate with each other, with no additional sensory cues. One researcher, attached to a brain-computer interface (BCI) in India, successfully sent words into the brain of another researcher in France, who was wearing a computer-to-brain interface (CBI). In short, the researchers have created a device that enables telepathy. In the future, rather than vocalizing speech — or vainly attempting to vocalize your emotions — your friend/lover/family member might just pluck those words and thoughts right out of your head. 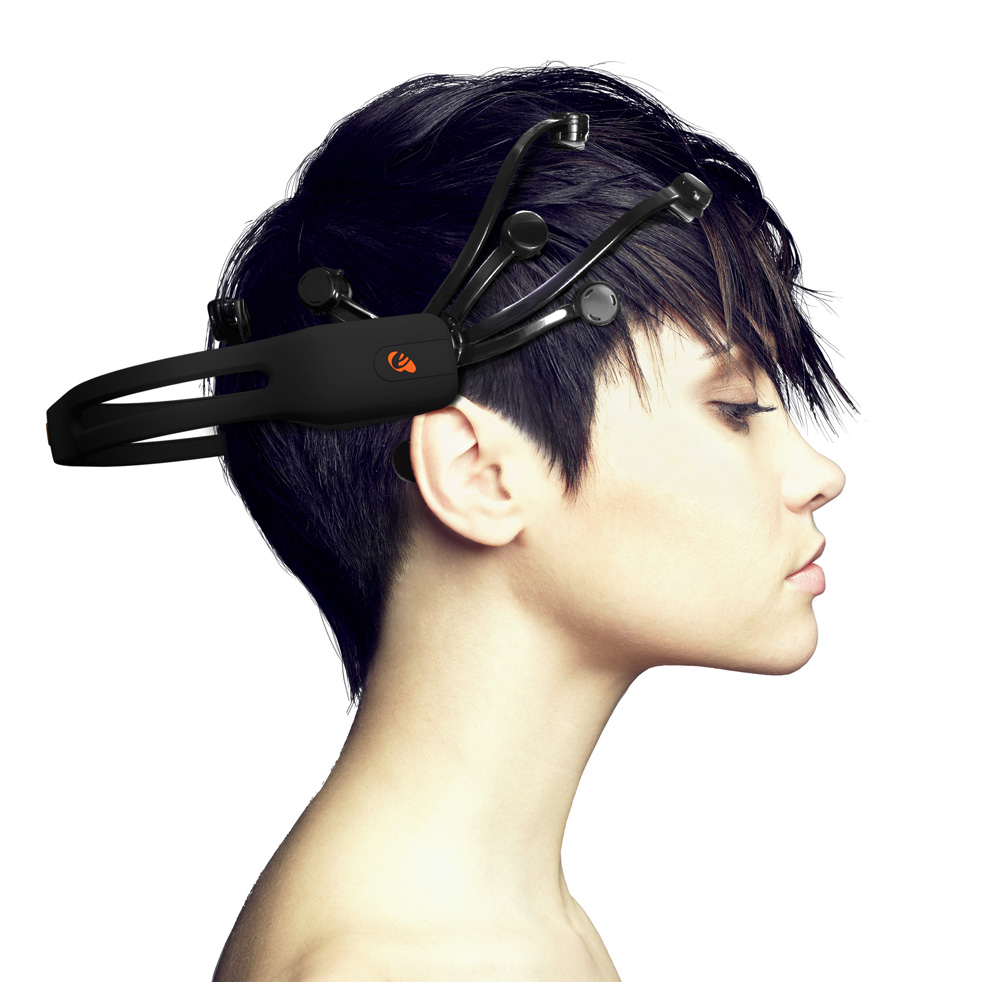 Over the last few years, researchers have started to get quite good at reading your brain activity — your thoughts. Commercial brain-computer interfaces that you can plug into your computer’s USB port have been around for a good four or five years now, and in the last couple of years we’ve seenadvanced BCIs that can be implanted directly into your brain. To create a brain-to-brain connection (i.e. telepathy) you also need the other side of the equation, however: You need to be able to take some data and input it into someone else’s brain — and that, as you can imagine, is proving to be a bit harder.

Now, however, a team of international researchers have cracked it. On the BCI side of things, the researchers used a fairly standard EEG (electroencephalogram) from Neuroelectrics. For the CBI, which requires a more involved setup, a transcranial magnetic stimulation (TMS) rig was used. TMS is somewhat similar to TDCS, in that it can stimulate regions of neurons in your brain — but instead of electrical current, it uses magnetism. The important thing is that TMS is non-invasive — it can stimulate your brain (and thus cause you to think or feel a certain way) without having to actually cut into your brain and use some electrodes (see: deep brain stimulation). 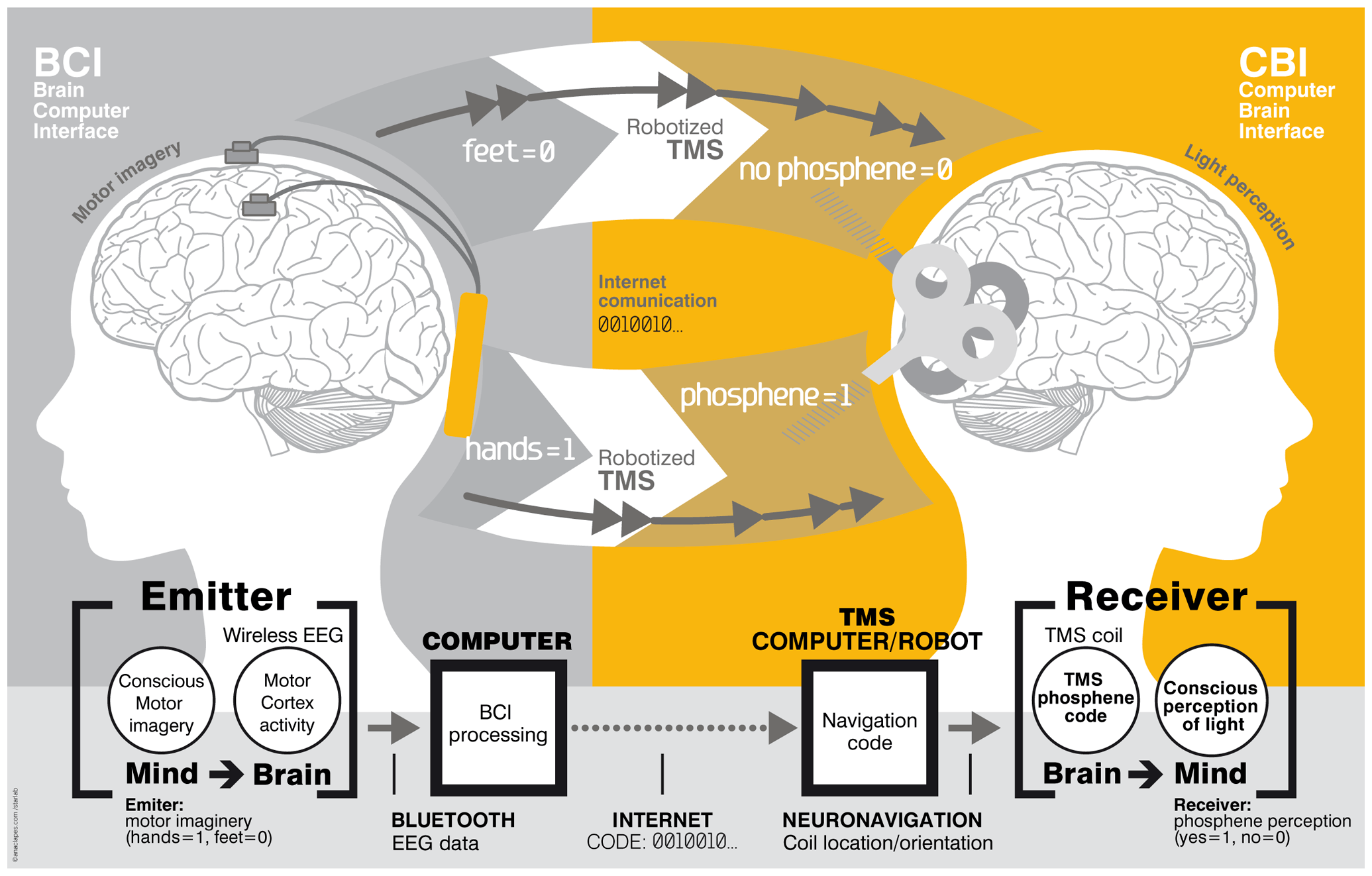 This is how the brain-to-brain system works. The BCI reads the sender’s thoughts — in this case, the sender thinks about moving his or her hands or feet. Thinking about feet is equivalent to binary 0, while hands is binary 1. With a little time/effort, whole words can be encoded as a stream of ones and zeroes. These encoded words are then transmitted (via the internet or some other network) to the recipient, who is wearing a TMS. The TMS is focused on on the recipient’s visual cortex. When the TMS receives a “1″ from the sender, it stimulates a region in the visual cortex that produces a phosphene — the phenomenon whereby you see flashes of light, without light actually hitting your retina (when you rub your eyes, for example). The recipient “sees” these phosphenes at the bottom of their visual field. By decoding the flashes — phosphene flash = 1, no phosphene = 0 — the recipient can “read” the word being sent.

You would be right in thinking that this is a rather complex and long-winded way of sending messages from one brain to another — but for now, this is truly the state of the art. As you can see, this method very neatly sidesteps the fact that we really don’t know how the human brain encodes information — and so, for now, instead of importing a “native” message, we have to use our own encoding scheme (binary) and a quirk of the visual cortex. [Research paper: doi: 10.1371/journal.pone.0105225 – “Conscious Brain-to-Brain Communication in Humans Using Non-Invasive Technologies”]

Read our featured story: The human brain’s remarkably low power consumption, and how computers might mimic its efficiency

Still, even if it does seem a little bit like hard work, there’s no denying that this is a conscious, non-invasive brain-to-brain connection. While the recipient isn’t going anywhere fast (the TMS is bulky), it’s not hard to imagine a small, lightweight EEG that allows the sender to constantly stream thoughts back to the receiver. I’m sure we’re not more than a few years away from a setup that allows the receiver to walk around, too — at which point, assuming we make some progress in decoding the brain’s activity, you basically have a persistent brain-to-brain link that would allow you to always know what your friends/family/loved ones are thinking. You might use such a telepathy system for sending simple thoughts from a distance — I love you — or maybe it could be useful for truly getting inside someone’s head when they’re struggling to voice their emotions.

The future is going to be a fun and/or scary and/or amazing place to live in, friends.