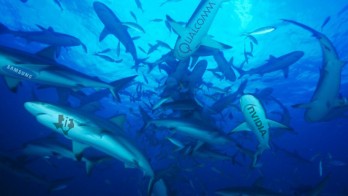 The semiconductor industry in 2015: New nodes and upstart companies fuel a dynamic market

2015 is likely to be a particularly critical year on multiple fronts, for multiple semiconductor companies. There’s a great deal of potential disruption and meaningful product improvements coming down the pipe. Let’s take this time to look at the big semiconductor trends we expect to see over the next 12 months.

The mobile market has changed a great deal in the past 12 months, and the shifts aren’t over. From inside the United States, it’s been largely business-as-usual in the smartphone and tablet business. Worldwide, it’s a different story. New players are rising to the forefront, established companies are snapping up market share, and the end result is a reshuffling of vendor share — and vendor profits.

Samsung has lost more than a third of its market share, while Apple has given up almost 10% of its own. Newcomer Xiaomi has five times the market share it did in 2012, while Lenovo and LG have picked up substantially in the same period. Most of Samsung’s losses, however, have been to a broad swath of vendors in new markets, and this same trend is clear across the industry. The “Others” column grew substantially in 2014. Samsung has responded by trimming its product divisions by up to 30%.

Intel grew its share of the tablet market significantly, and may have even taken a larger share of the revenue pie from Qualcomm in the back half of the year — though this doesn’t include the fact that Intel is selling devices at a loss. Overall growth in tablets has slowed substantially, however, thanks to the shift towards larger “phablet” devices and thanks to a slower refresh cycle. 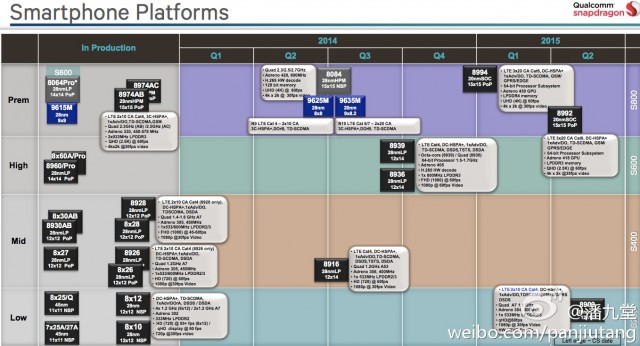 Even as the worldwide markets shift, new technology is coming online. Qualcomm will launch its first 20nm Snapdragon hardware in the next few weeks, the Snapdragon 810 (early reports claimed it was used in the Samsung Galaxy Note 4, but that’s now been ruled out by Samsung itself). The Snapdragon 810 combines a quad-core Cortex-A57 and Cortex-A53 cluster on 20nm technology with an associated 20nm modem that’s capable of multiple advanced LTE features. Power consumption and performance should both improve, and the Adreno 430 GPU is expected to be significantly more powerful than the Snapdragon 805’s Adreno 420. We’ll also see the wide debut and availability of Android 5.0 “Lollipop” next year, and the associated performance benefits. Qualcomm is still working on a successor to Krait, based on its own architecture, but with an unknown launch date.

Mobile phones and tablets should jump ahead technologically, but with companies like MediaTek, RockChip, and Allwinner gunning for design wins of their own, we could see further competition and sharp price drops throughout the year. Intel’s decision to back a budget chip design at TSMC and to partner with a company like Rockchip may end up being a very smart move.

Later in the year we should see 14nm hardware as well, though that’s expected to mostly be a Samsung shift, and there are rumors swirling about whether or not the company is having yield problems. Apple is currently the only company widely expected to make the jump to 14nm in 2015 and it’s entirely possible that they’ve locked up the first production runs from both Samsung and possibly GlobalFoundries. TSMC is expected to follow Samsung at the 16nm node, but not until the tail end of the year.

2015 is going to be a busy year for Intel, provided the company keeps to its current roadmaps. Intel’s 14nm Broadwell ramp was delayed by nearly a full year, with ultra-low power Core M systems only recently starting to hit the market. Broadwell is expected to ramp up through the first half of the year, with the introduction of higher TDP chips that can replace the current crop of Haswell parts.

We’ve seen Core M reviews start to creep into the market, and the results aren’t particularly impressive. There’s some evidence indicating this isn’t the chip’s fault, however. Ultrabookreview.com has reviewed both the Asus Transformer Book T300FA and the Asus Zenbook UX305. Both laptops have the exact same CPU, but the T300FA has a 30Whr battery and a 1366×768 screen, while the Zenbook UX305 has a 45Whr battery and a 3200×1800 display. 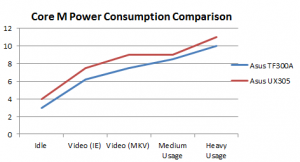 The comparison here isn’t perfect, since the UX305 also has 8GB of RAM and an SSD instead of a rotating hard drive, but it’s close enough for our purposes. The UX305 draws significantly more power than the T300FA at every test. We suspect much of the difference in idle and low power workloads is the monitor itself — and while the difference between 6.5W and 7.2W may not seem like much, that’s a 21% increase for the more expensive ultrabook.

These first Core M laptops, in other words, appear to have taken the power savings that Intel offered with Broadwell and sopped it up with more expensive peripherals. We’ll have to see if that changes later in the year.

Broadwell’s mobile and desktop flavors are expected to deliver significant GPU improvements, with small increases in CPU performance. Skylake, when it arrives late in 2015, will be the new CPU architecture, though Intel is currently playing those cards very close to its chest. The company has talked about developing concept PCs that standardize wireless interfaces and eliminate cabling, but OEMs may or may not follow its lead on such matters.

AMD will launch two new consumer product families in 2015 — its Carrizo APU and its multi-ISA compatible platform, dubbed Skybridge. Carrizo will be the last of the Bulldozer-based products to debut from Sunnyvale before the debut of its next-generation CPU architecture, currently expected in 2016. AMD hasn’t had much to say about Carrizo, beyond noting that the chip will be a huge leap forward for AMD’s power efficiency. 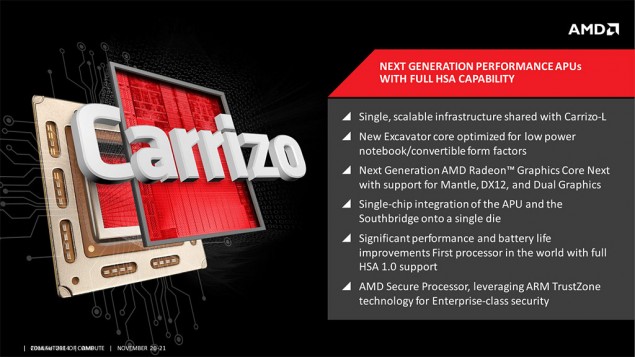 Based on AMD’s public comments and some private, off-the-record conversations, we expect Carrizo to be a power efficiency story over raw performance. Kaveri made meaningful improvements to the AMD/Intel performance delta in 2014 — if the company can pull that off again, it should be able to boost its laptop visibility, even if top-end benchmarks don’t show much movement. 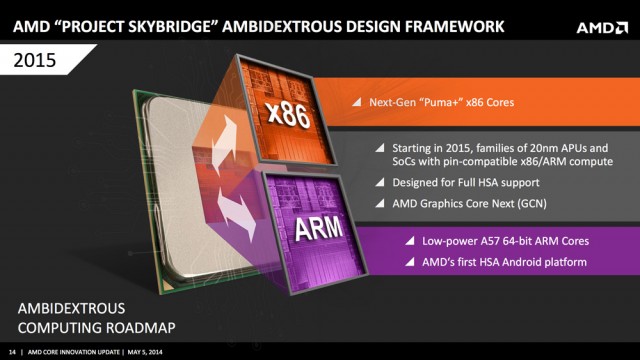 Project Skybridge, the dual ARM/AMD platform, is rather more interesting. This new version of AMD’s Jaguar will launch on 20nm with full HSA support and with combined ARM/x86 compatibility. Not only should the shift to 20nm bring increased clock speeds and lower power consumption, adding ARM compatibility may mean AMD has revisited and redesigned the chip’s slow onboard memory controller. It’s not unreasonable to think these improvements could add 15-20% to Jaguar’s performance — at which point the chip would nearly match Steamroller’s clock-for-clock efficiency in certain benchmarks. These new chips will also be HSA-compatible, marking the first time that AMD has pushed its vision of heterogenous compute into such low TDPs and form factors.

I don’t want to go on record saying that we won’t see innovation in the desktop and conventional laptop space — not after 2014 turned out to be something of a banner year for concept hardware. I think it’s fair, however, to say that many of the innovations we highlighted in our article occurred around the SoC rather than directly inside of it.

Low-latency gaming APIs are clearly here to stay, and we expect those to be a major topic of conversation in 2015 with DirectX 12 and Windows 10 dropping at the end of the year. Intel and AMD will both continue to iterate on their respective hardware, and AMD could win market share and recognition if its ARM server business takes off and it delivers on Project Skybridge.

The evolution of mobile technology, however, is clearly what’s driving the overall industry. From “disruptive” apps like Uber to the furor surrounding Google Glass, to the dubious efficacy of smartwatches, mobile hardware and devices increasingly shape the boundaries of what’s possible in computing. With new 20nm hardware, 64-bit SoCs, and 14nm following in 2016, we should see strong scaling on all fronts — even if the companies that drive that advance are jockeying for position and dominance.