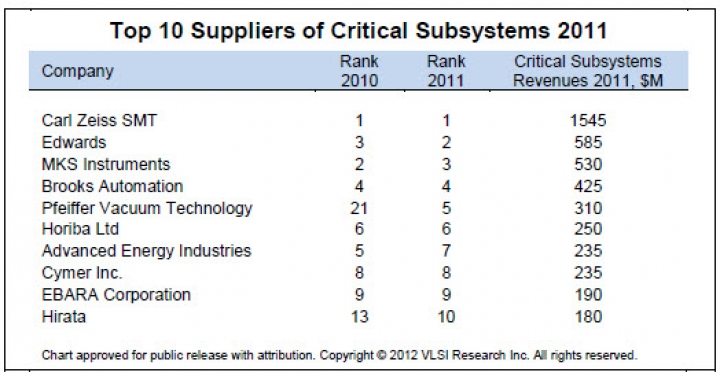 There were no changes in the rankings list this year due to stable market conditions and the absence of major mergers and acquisitions. Carl Zeiss SMT maintained its top spot among critical subsystems suppliers with sales of lenses valued at $1260M while Edwards, in second place, narrowed the gap slightly by growing sales by 19% to $660M.  MKS Instruments also outgrew the market as it benefited from strong sales across its extensive product range to hold third place with sales of $508M. Brooks Automation lost ground with sales declining slightly, but still managed to keep fourth place just ahead of Pfeiffer Vacuum. Advanced Energy had a solid year and asserted its dominance of the RF power subsystems market by growing 15% to retain sixth place. Horiba and EBARA Corporation kept seventh and eighth place respectively with Ultra Clean Technology taking ninth. Finally, Ichor Systems managed to just stay ahead of ASML by putting in a good performance with sales increasing 15% to retain tenth.

Increase your return on investment with efficient Inventory management

Acquisitions that were completed in 2013 started to make a difference in 2014. ASML jumped up to eleventh through their acquisition of Cymer as revenues were boosted by higher average selling prices of EUV lasers to a value of $171M. Entegris’ acquisition of ATMI pushed them up from 23rd to 19th.

The contents of this release are approved for use by media for news purposes identifying VLSIresearch as the source. No advertising or promotional use of this release by corporations can be used without VLSIresearch approval. All trademarks, service marks, and logos are the property of VLSI Research Inc. or their respective owners.

VLSIresearch is an award-winning provider of market research and economic analysis on the technical, business, and economic aspects within semiconductor, nanotechnology, and related industries. VLSIresearch provides intelligence for faster and better decision making in the areas of semiconductors, photovoltaics, LEDs, manufacturing, materials, and critical subsystems.  VLSIresearch was founded in 1976. Learn more at www.vlsiresearch.com.

Excess Logic provides free IT Asset Management and Asset Recovery Services in San Jose, Santa Clara, Sunnyvale, Fremont, Milpitas and Bay Area. We provide a free pick up and remarketing of your surplus equipment and excess inventory and pay 50% back of proceeds on qualified equipment. Connect with us 650-307-7553 to get more details about our program.