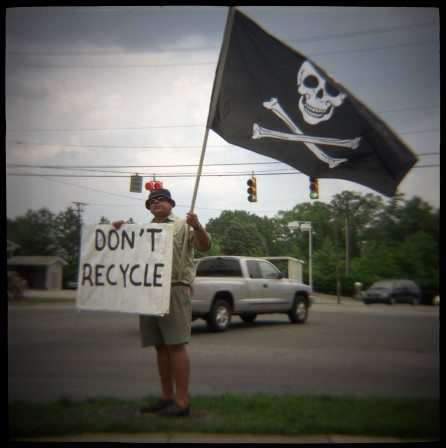 Nothing boils my blood more than walking by a trash can filled with empty water bottles or a pile of paper. “Why?” I often yell as I violently shake my fists toward the sky. I understand that everybody isn’t on the same page when it comes to being eco-friendly. Yet, I still felt compelled to do some research on the top 10 reasons why people don’t recycle. Here are the results:

The Reality: Tossing everything in the trash is a hazard for everyone. In addition to the obvious cons to landfills, certain metals, electronic waste, printer cartridges, foam, rubber and other materials contaminate ground water and landfills. Have you seen “Erin Brockovich”?

Some folks don’t have recycling bins in their apartment complex, and some cities or municipalities don’t even offer a recycling service. So this forces some to take the time to research recycling centers in their area.

The Reality: There are efforts that you CAN do other than recycling. This includes reducing the amount you throw away and making an effort to reuse items when you can. Reusabe items include: bottles, plastic bags, foil, coffee grinds and donating old clothes to a local charity.

No Desire to Be Green

To some people the environment and global warming are very low on their priority list. Therefore, they lack motivation to contribute to green-friendly initiatives like recycling.

The Reality: Adding to the waste in landfills creates greenhouse gases in our atmosphere. Landfills also create liquid waste called leachate that contaminates the soil. These problems are incentive for all of us to go green.

Some people say they don’t have time to wash out items, bag recyclables separately or drop them off at a recycling center. Any or all of these steps serve as another reason NOT to recycle on a regular basis.

The Reality: Speaking of things being time consuming, did you know paper takes five months to break down in a landfill, milk cartons take five years, plastic bags take 10-12 years and a glass bottle takes about 1 million years!

Many people don’t want the monthly expense of paying for a recycling service, or want to pay for the gas to commute to a recycling center. Additionally, people reject the idea of paying extra for reusable items like shopping bags.

The Reality: An economics study found that curbside recycling delivered an average environmental savings of $68 per household per year. This equated to $424 million per year.

Many people are misinformed about the urgency of the growing waste problem in the U.S., which includes the challenge of limited space and its impact on the Earth. Many believe Earth’s resources are abundant.

The Reality: The need for recycling is growing. The Environmental Protection Agency (EPA) estimates that 75% of trash is reusable/recyclable. So there’s plenty of room for improvement.

Yes, this made the list. The fact is some people don’t want to make the effort to walk to a separate bin other than the trash can and organize the items they are pitching.

The Reality: If social guilt isn’t enough, perhaps people can dial up their level of social responsibility to be a good role model for children, neighbors and friends. Be a positive inspiration for the people around you!

Sorting recyclable items for the appropriate bins is too much for some. Trying to discern which types of products and plastics are appropriate for recycling can be confusing. Understanding schedules for recycling pick-up can also add another layer of confusion.

The Reality: Recycling rules vary by community. So you can always call your local municipality, visit its website or ask a neighbor. Or for more information, you can use online resources like GreenAmerica.org or PlasticRecycling.com.

My Contribution Has No Impact

As if there isn’t power in numbers, many believe the fallacy that their effort to recycle doesn’t contribute to a greater solution.

The Reality: Individual product use, pollution, energy use, greenhouse contribution and waste habits DO have significant environmental health implications. For example, according to the EPA, the average American produces 4.7 pounds of trash per day and 1,600 pounds per year!

Since most of the hours of each day are spent at work, many people use the lack of a recycling program as an excuse not to recycle at all. The lack of recycling bins creates an “out of sight, out of mind” philosophy.

What are your reasons for not recycling? What are some reasons you’ve seen others use to not recycle? Commit to adopting new small habits that will help you be greener and help give the environment a leg up!