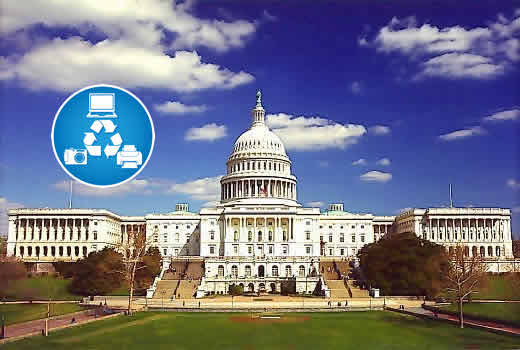 This summer, the U.S. government has become a global leader in electronic waste / e-waste recycling.

In July, the federal government – the largest consumer of electronic devices in the United States – stopped doing business with vendors who use dispose computers purchased with government money in landfills at the end of their lifecycle. The implementation follows another rule that bars all federal agencies from dumping all electronic gadgets, from cell phones to fax machines.

The new regulation will have an impact on large government contractors, including large vendors like AT&T, SAP and Verizon. According to the General Services Administration (GSA), the recycling of used electronics has become a large problem for the federal government. According to a report, the feds dispose of 10,000 computers a week. In 2009 alone, 2.37 million tons of computer equipment was disposed, but only a quarter of it was recycled. Add the 140,000 contracts valued at $11 billion in 2011 that cover the cost of purchasing new electronic equipment, and the e-waste issue becomes even more obvious.

Now government agencies will have to reuse electronics as long as possible until they no longer function. Procurement managers have an option to transfer older electronics to other agencies, offer them to schools or sell them.

Previously, most electronics were disposed in either landfills or incinerators, but that practice is on its way out: now those electronics will go to e-waste recyclers certified by either R2 or eStewards. Not all environmental groups will be satisfied with this news, however: R2 has been criticized for allowing e-waste to be exported out of the U.S., while eStewards prohibits the practice.

The shift in policy started in November 2009, when President Obama issued an executive order that established sustainability goals for federal agencies to improve economic, energy and environmental performance. Last summer, the GSA worked with a White House office and the Environmental Protection Agency to create what is called the National Strategy for Electronics Stewardship. The GSA now includes electronics on a site called GSAXcess where unwanted electronics can be registered and then re-distributed while offering transparency from the ability to monitor the proper disposal of e-waste.

The change is important because electronics contain valuable rare earth minerals and precious metals that are becoming more expensive and difficult to source as the demand rises for new gadgets like smartphones and tablet computers. Other materials like glass, metal and plastic can also be recycled, but require careful disassembly.

Electronics tossed into landfills can leak toxins including lead and mercury. Most e-waste is exported to countries like China where recycling factory conditions are often dubious for their working and environmental conditions. The result is a growing health threat in the United States and abroad, from contaminated water to air pollution.

Could the largest user of electronics change consumer behavior? While the government describes e-waste with just another acronym, Federal Electronic Assets (FEA), most consumers are still preoccupied with snagging the latest phone, laptop or tablet.

Both bureaucrats and gadget geeks can do more to ensure that unneeded electronics do not end up in local waste streams. A change in attitudes is not only good for the environment, but it is smart business: all those expensive minerals made the global e-waste market worth $70 billion in 2010 alone.

Leon Kaye is a freelance writer and journalist based in California. Editor of GreenGoPost.com, he also contributes to Triple Pundit and the UK’s Guardian Sustainable Business.