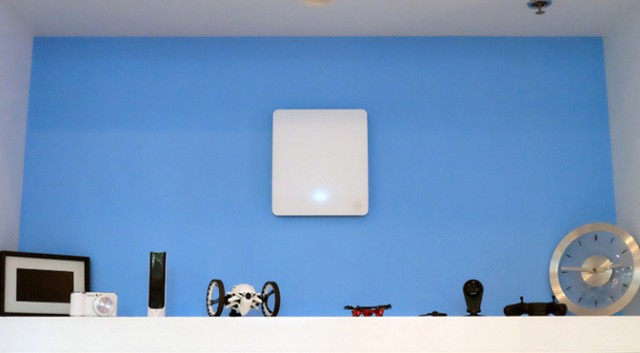 Wireless power system charges devices up to 20 feet away

A plethora of firms are racing to develop a feasible method for delivering power wirelessly, but thus far the best we’ve managed are short-range standards like Qi and PMA. A company called Energous is on hand at CES with a demo of its new wireless power system known amusingly as WattUp. It uses a mix of Bluetooth and RF to combine the convenience of wireless power with the security of a wireless network. If it all pans out, WattUp could juice up your phone from up to 20 feet (6.1 meters) away.

The heart of WattUp is a hub that’s basically a powerful RF transmitter station. Devices that want to receive power from the hub announce their presence via Bluetooth 4.0. WattUp then uses that connection to direct the wireless power signal to the device. It operates in the same unlicensed spectrum as WiFi, which makes me wonder about possible interference in busy wireless environments. Assuming the connection holds, though, the WattUp signal is absorbed and converted to DC power in the phone or tablet by a receiver chip.

Whenever you’re sending an electromagnetic signal through the air, you have to worry about signal drop-off as dictated by the inverse square law. The gist is that signal strength decreases at a rate equal to the square of the distance. For example, a device twice as far away from a source only gets one-quarter of the energy. Some experiments in long-range wireless power have simply brute forced their way through this problem to the point that they actually heat up the air around the transmitter. WattUp combats this problem with a type of beam-forming technology. That Bluetooth connection is used to focus a tight cone of electromagnetic waves on the target, and it can even track the device and recalibrate as needed. A standard Qi wireless charger is about 90% efficient, but Energous claims it can hit 70% at much greater distances.

Energous also has proprietary technology that can hand off the task of providing power between multiple hubs, just like your phone can transfer from one cell tower to the next to maintain a connection. The intention is to build a WattUp transmitter that is tied into the state of your devices. So when you get home, the system begins charging your phone. When it detects that the phone is full, but maybe your tablet is getting low from an evening of couch computing, it switches automatically to recharging that one. It could also connect to wearable devices or anything else if they have a receiver.

WattUp also takes into account one of the drawbacks of wireless power you don’t usually think about: security. If you’ve got a wireless power base station that can blast energy 20 feet away (improved from 15 feet last year), there could be a lot of devices in range, not all of which are yours. You can secure your wireless network against outside access, so why not your wireless power network? The Bluetooth tether that is used to direct beam-forming can also authenticate devices. WattUp can operate in protected mode where only authorized devices can connect, or in public access mode where anyone with the hardware can soak up some electrons (controlled via an app).

The company hopes to license the technology to device makers soon. The hardware required on the phone side is cheap, so it might gain some traction. However, the energy routers will probably be a substantial investment, especially considering most homes would need more than one.